View source
watch 01:05
What is the Rasengan?
Do you like this video?
Play Sound

The Rasengan is a spinning ball of chakra formed and held in the palm of the user's hand, which is only known to a handful of shinobi.

Jiraiya describes the Rasengan as stronger than the Chidori,[5] a statement that Sasuke Uchiha concurs with after comparing the damage caused by the two attacks.[6] On contact, the Rasengan grinds into its target, propels them along the Rasengan's trajectory - either away from the user or into the ground beneath them - and at some point bursts, causing severe damage at the point of contact.[7]

Completion of the final step is by far the most difficult. For this reason, Naruto Uzumaki and Konohamaru Sarutobi both use shadow clones to help them with forming the Rasengan, the clone's hands being used to create the shell. This gives each of them a shortcut to using the Rasengan without spending the time to fully master their chakra.[12] Both do eventually learn to use the Rasengan without clones: Naruto during the Fourth Shinobi World War;[13] Konohamaru during the decade after the war.

While generally it cannot be thrown,[14] in the anime, further mastery of this technique can allow the user to use it as a projectile.[15] There are two broad methods by which the standard Rasengan's offensive potential can be increased: making the Rasengan itself bigger (as with the Big Ball Rasengan) or by using more than one Rasengan at a time (as with Spiralling Serial Spheres). Having absorbed Konohamaru's Rasengan, Momoshiki seamlessly melded it with his chakra to drastically increase its size.

When in Sage Mode, the user can use a senjutsu-enhanced version known as Sage Technique: Rasengan (仙術・螺旋丸, Senjutsu: Rasengan, English TV: Sage Art: Rasengan, literally meaning: Sage Technique: Spiralling Sphere).[18] It is fundamentally the same as the normal version, except stronger. While in Sage Mode, users have an easier time forming larger Rasengan, such as the Ultra-Big Ball Rasengan. For Naruto, it is while using Sage Mode that he is first able to throw the Wind Release: Rasenshuriken, which he was previously unable to do because it would sporadically lose its shape. 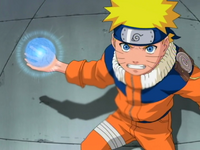