Return of the Morning Mist

"Return of the Morning Mist"edit

"Eye to Eye: Sharingan vs. Sharingan!"

"Return of the Morning Mist" (朝霧の帰郷, Asagiri no Kikyō) is episode 81 of the original Naruto anime.

Two hooded persons enter Konoha — a guard notices them at the village entrance, but is put to sleep by genjutsu. Sasuke is seen thinking about the night of his parents' death and his inability to stop it — and throws a kunai at the place where he perceived his memory. Naruto completes his morning training and meets up with Konohamaru, who is gazing at the mountainside image of the Third. Konohamaru impresses Naruto with his commitment to rebuilding the village, and Naruto hands him a coupon for free ramen at Ichiraku. Somewhere in Sunagakure, the rotten corpses of the Fourth Kazekage and his two guards are discovered by a shinobi team led by Baki, who curses Orochimaru for his deception, while the latter is shown recovering in his hideout alongside Kabuto while discussing the difficulty of his situation and his future goals. Jiraiya is approached by the village's elders, who offer him the position of Fifth Hokage, as he is one of the legendary Sannin. He declines, but adds that if they are looking for a Sannin to fill the position, then Tsunade would be a much better candidate for the title. He offers to find her for Konoha, though asks that he be allowed to take Naruto with him. Sasuke is called to a tea shop by Kakashi, where Asuma Sarutobi and Kurenai Yūhi are already there. Within the tea shop are the two hooded figures, which the three jōnin realise but don't convey; with a nod by Kakashi, the two jōnin head to meet up with the duo, while Sasuke is whisked away by Kakashi. Asuma and Kurenai demand to know the identities of the duo, and are surprised to see the infamous Itachi Uchiha and Kisame Hoshikagi in their village. The four engage in battle, though Itachi and Kisame quickly gain the advantage. As Asuma and Kurenai are about to be killed, Kakashi comes to their rescue. 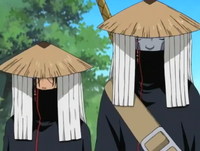