Kabuto sees that Mū stopped moving and wonders if he was detected. He has Mū summon the Second Mizukage, the Third Raikage, and the Fourth Kazekage. The Kage discuss their situation. Gaara learns whom his division will fight. Darui and his division also prepare to fight. At the alliance headquarters, after receiving intel from the Sensor Division, Shikaku proposes a strategy to the Fourth Raikage. After agreeing to it, the leaders make one amendment and send the Third Tsuchikage to fight the Second Tsuchikage due to his abilities. Black Zetsu arrives at the location of the daimyō of the Five Great Shinobi Countries.

The Black Zetsu's attempt to capture the daimyō of the Five Great Shinobi Countries fails due to decoys. The Mizukage escorts the Frost Daimyō to a new location. The First Division goes in to battle against the White Zetsu Army. Chiyo's group arrives at the Surprise Attack Division's location. Ōnoki provides backup for Gaara's division. Darui faces the Gold and Silver Brothers.

Darui, Samui, and Atsui battle the Gold and Silver Brothers. The Fourth Raikage and Tsunade talk about the history of Kinkaku and Ginkaku. Both Samui and Atsui are sealed away in the Benihisago. Darui's word soul is cut and cursed by the Shichiseiken, and then recorded by the Benihisago. Meaning, if he says the word he has said the most during his life, he will be sealed away.

Darui realises if he stays silent too long he will be sealed away. Ginkaku tells Darui that he is just a tool of the Raikage. Darui then tells Ginkaku that he is the Fourth Raikage's right arm, and is more than just a tool. As he begins to be sucked into the gourd, Darui realises that two words he said sounded like his taboo word "dull". As he is sucked in Darui apologises to many people, making "sorry" the word he has said the most. Darui knocks Ginkaku into the rope, and manages to steal the sword, and gourd. Darui curses Ginkaku with the sword, and as Ginkaku pleads for Kinkaku's help he is sucked in to the gourd. Enraged of his brother's capture, Kinkaku then enters into his Version 2 form.

While training to master his new technique, Naruto senses something. Kinkaku rampages on the battlefield, and the alliance headquarters are notified. The Fourth Raikage orders the fifth treasure be sent to the battlefield. Shortly after its arrival, backup arrives from the second, fourth, and fifth divisions. With the help of Shikamaru, Chōji, and Ino, Darui seals Kinkaku within the fifth treasure.

Shikamaru, Chōji, and Ino are confronted by Kakuzu. Kakuzu points out that Dan Katō and Asuma Sarutobi are among the battle. Knowing they are the only ones that can defeat him, Team Asuma agrees to fight their former teacher. Elsewhere, Ibuse paralyses the Surprise Attack Division, where Mifune engages Hanzō in combat.

Ino, Shikamaru, and Chōji prepare to fight Asuma. Mifune and other samurai arrive to assist the Surprise Attack Division and battle Hanzō, Chiyo, and Kimimaro. Mifune disables Hanzō's ninjutsu by attacking him between his formation of hand seals. While fighting each other, Mifune remembers the first time he fought with Hanzō. He then surprises Hanzō with his ability to dodge several of his attacks, and was still able to cause damage to him.

Mifune reminds Hanzō of what Hanzō had told him during their prior fight as Mifune lay there dying from the poison he received from Hanzō's kusarigama strike. As Mifune laid there dying, Hanzō appreciated his bravery and gave him an antidote for the poison. Reminded of his prior life and in a tremendous demonstration of will, Hanzō places his faith in Mifune and overcoming the talisman that governs him, he commits "seppuku" (切腹, Literally meaning: stomach-cutting) with his broken kusarigama. Piercing the internal venom gland located within his body in the process, an enormous poisonous cloud is released that paralyses the entirety of Hanzō's movements, creating an opening for the Fifth Division to exploit in order to seal him away for the remainder of the war.

In the battle between Asuma and his former students, Shikamaru was able to use his Shadow Imitation Technique to herd Asuma close enough to Chōji for him to strike. But as Chōji uses his Partial Multi-Size Technique on his arm to strike at Asuma, he holds back and stops. This gives Asuma the chance to strike Chōji and prepare to use Wind Release: Dust Cloud Technique, warning his students to run away.

"The Time of Vows" (誓いの時, Chikai no Toki)

Ino saves Chōji from being hit by Asuma's technique. Asuma tries to goad Chōji into fighting, to no avail. Ino fights for Chōji, and she, Chōza, and Shikamaru remind him of his oath. Shikamaru remembers Asuma's last request, and urges Chōji to man up. Kakuzu runs from Izumo and Kotetsu. Tenten finds the Bashōsen, and uses it to destroy Kakuzu's lightning mask. The First Division asks for Chōza's aid in battling Dan. Chōji releases his butterfly wings without ingesting the Three Coloured Pills, much to the amazement of his father; Asuma is pleased that Chōji is ready to fight.

Chōji sprouts butterfly wings as he, Ino, and Shikamaru make their final attack against their sensei. Ino uses Mind Clone Switch Technique on two of White Zetsu, and uses them to attack Asuma, Shikamaru uses Shadow Sewing Technique to make Asuma jump as Chōji attacks and punches him into a wall. Shikamaru throws Asuma's chakra blade to Chōji who punches it, sending it flying towards Asuma. The blade lands on Asuma's shadow, immobilising him. Asuma says their formation was perfect, thanking them as two Sunagakure shinobi seal his body. Naruto Uzumaki and Killer B take a break from training, and Naruto notices that he is not the only shinobi who possesses the Nine-Tailed Demon Fox's power. Naruto gets suspicious and runs out to find a group of Konohagakure ninja barring his way. 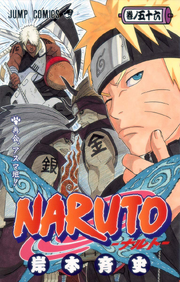