The user first opens at least three of the Eight Gates, removing their body's limitations on their maximum speed. Once this is done, the user - who is so fast that it's difficult to follow their movements - continually strikes the target from multiple directions, pummelling them into the air. When Rock Lee uses Reverse Lotus on Gaara, Gaara's Shield of Sand is unable to react fast enough to protect him. As Lee attacks Gaara, he gradually wraps Gaara with the bandages he wears, allowing him to better manoeuvre Gaara to deliver a finishing blow that sends him crashing back to the ground.[1]

Lee was taught the Reverse Lotus by his idol, Might Guy, with the understanding that it would be an attack of last resort, used only in dire circumstances. This is because opening any of the Eight Gates places a huge strain on the user's body, likely exhausting their body beyond the point of moving or even remaining conscious afterwards.[1] Ordinarily this shouldn't be an immediate problem, because the Reverse Lotus's innumerable initial attacks as well as the power of its finishing blow will likely defeat most opponents. But if the opponent is able to endure the Reverse Lotus, the user will be at their mercy.[2] 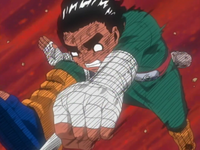