Rift (亀裂, Kiretsu) is volume 17 of the Boruto: Naruto Next Generations manga.

Code is pleased by Boruto's drawing on his Kāma's power. Recalling Momoshiki's taunting, Kawaki insults him. Code is curious by how Momoshiki's consciousness can emerge while Boruto remains only a vessel. They are surprised to notice Boruto is still in control as he cautions Kawaki to stay back. Boruto attacks with shadow clones, and Code notices his increased strength. He places a mark on Boruto and uses it to avoid attacks and launch his own at the clones. Boruto manages to pull Code through his mark with the help of a clone and lands a punch. Code puts distance between them, and Kawaki wonders how Boruto is in control and stronger than before. Code consults Ada, who while unsure of what's happening in Boruto's body, speculates it might be due to Amado's drugs, and warns him not to underestimate Boruto. Naruto instructs Ino to look for Boruto's chakra instead of Kawaki's. Shikamaru arrives, concerned that the enemy might be where they are as well, and clarifies he'll be going with Naruto, as he no longer has Kurama's power.

He further justifies it with Sasuke still being away tracking Code, and Sai being busy guarding Amado. Hinata wants to join them, but Naruto wants her to stay with Himawari. Himawari asks Naruto to come home safe with Boruto and Kawaki. Naruto reassures her while entering Sage Mode. Boruto attempts to absorb Code's marks in vain. Kawaki explains that while they're mostly chakra based, there's enough iron from Code's blood in them to make them physical matter that Kāma can't absorb. He asks Boruto about Momoshiki, who also speculates Amado's medicine might be responsible for him not emerging. Boruto wants to focus on taking Code down. Code comments that regardless of medicine, they can't get rid of Momoshiki, and that whoever he is, he's still an Ōtsutsuki, and as a quality sacrifice, should produce a fine God Tree. Boruto notices Code's knowledge of Amado's drugs. Code decides to grab Boruto when his maturation is almost complete, and moves through his marks to grab Kawaki for Ada. Kawaki attacks Code with a shadow clone, forcing him to move through a mark to escape Boruto's Rasengan. Code comments on Kawaki's change of heart, who explains all he does is for Naruto, Boruto adding that taking him down now would be the most expedient thing to do. He and Code exchange insults. Naruto in Sage Mode finds Boruto and an unidentified chakra, and coordinates with Ino. Naruto and Shikamaru move out, Naruto leaving behind two shadow clones gathering natural energy. He assuages Shikamaru's concern about the duration of Sage Mode, and Shikamaru in turn asks him not to overdo it. Code and Boruto fight, Code narrowly avoiding Boruto's Vanishing Rasengan. Ada tells Code to stop fooling around. Boruto suddenly collapses in pain.

Kawaki fears Boruto is experiencing side effects from Amado's drugs. Time stops for everyone but Boruto, who has another vision of Momoshiki. He tells Boruto that the drugs are just a stopgap measure in his Kāma's extraction. Boruto recalls time also stopped before when Momoshiki was defeated. Momoshiki notes Code, finding him worthless, and decides to kill him to take possession of his Ten-Tails. Time resumes, and Momoshiki attacks Code, who narrowly avoids a Rasengan. He comments how superior it is to Boruto's strength with Kāma, seeing how Boro had no chance. Momoshiki intends to do the same to him. Sai informs Amado that Kawaki and Code are already fighting, having encountered an unknown chakra signature near Boruto. Knowing Code isn't a sensor, he finds it strange he found Kawaki so fast. Sumire suggests he has an Outer working with him, but Amado knows no Outer that skilled. Sai is hopeful that Naruto will defeat Code, and notices Amado is deep in thought. He is concern about what Kawaki might do. Momoshiki keeps using Rasengan, keeping Code on the defensive. Ada suggests he retreat.

Code immobilises Kawaki, using him as a shield against Momoshiki, who needs Kawaki as a sacrifice as well. He considers it an honour having met Momoshiki, and begins to leave. Momoshiki compresses a Rasengan and shoots it as a bullet, piercing Code. He grabs hold of Kawaki and comments on Code's inability to absorb jutsu with his White Kāma. Ada contacts Code. Momoshiki tells Kawaki to respect him for saving him, but Kawaki attacks, so Momoshiki prepares to break his arm. Shikamaru stops him with his shadow, allowing Naruto to grab Kawaki. They notice Boruto is possessed again. Momoshiki absorbs Shikamaru's jutsu, freeing himself. Ada still thinks Code should retreat, but Code is pleased by Shikamaru's presence. Naruto asks Kawaki about him and Boruto, but Kawaki is distraught Naruto is there, telling him to flee. Naruto refuses. Code takes Shikamaru hostage. Shikamaru yells for Naruto to ignore him and attack Code, saying he knew what he was getting into. Momoshiki decides to help Code kill Naruto, who is also a problem for him. Kawaki attacks Momoshiki, who kicks him aside. Naruto braces himself for Momoshiki's Ultra-Big Ball Rasengan. He notices his jutsu is being absorbed. Kawaki recalls Amado's words as he absorbs the jutsu with a Kāma that is purely a weapon now that Isshiki's soul is gone. All are surprised by it.

Kawaki recalls Amado's suggestion of acquiring a new Kāma. Ada speculates that Amado never gave Kawaki a choice, and restored the Kāma back when he restored his right arm, knowing he'd hunger for more power. Code deduces Amado intended for them to trigger Kawaki's power. Shikamaru listens to Code's replies, confirming he has an ally. Momoshiki is surprised, and attributes the new Kāma to Amado's schemes. He mocks Kawaki, telling him he'll be used by others until he is fed to the Ten-Tails. Kawaki begins attacking Momoshiki with Isshiki's jutsu, which both Naruto and Code recognise, and Code wonders about Amado's goal. Kawaki begins to understand something. Naruto is concerned about him, but Kawaki cuts him off, reminding him that Shikamaru is still a hostage, though one he doesn't particularly care about. He says he'll do what needs to be done for Naruto. Momoshiki attacks Kawaki, and the two absorb the other's ninjutsu. Kawaki continues using Sukunahikona and Daikokuten against Momoshiki as they clash. Boruto's personality begins to emerge. Kawaki pierces Momoshiki with chakra rods, and attempts to crush with cubes, but Naruto saves Boruto.

Code points out Naruto moved, but sees no more point in killing Shikamaru. Naruto has had enough, and questions if he really means to kill Boruto. Kawaki says it's what needs to done, as though Boruto is Naruto's son, Momoshiki is a demon who wishes to kill him. Naruto accuses him of acting like a demon, and Kawaki ignores it, saying the issue is that Naruto isn't able to do it himself, so he will. Naruto tells him to cool his head, and Kawaki retorts he has to face reality. Boruto wakes up, to Momoshiki's surprise, and tells him to go back to sleep. He says Amado's drugs have somewhat worked, but accepts they're no solution, as he almost killed Naruto. Kawaki asks if he remembers what he said before, which Boruto confirms. Boruto accepts they'll have to use their last resort plan, which Kawaki deems unfortunate. Naruto asks what that is, and Boruto apologises, asking him to give his best to Hinata and Himawari as he pushes him away with Wind Release: Gale Palm. Boruto asks Kawaki to do it while he can still hold Momoshiki back. Kawaki morphs his arm and punches through Boruto's chest, shocking everyone. Naruto yells out for Boruto.

Naruto rushes beside Boruto. Code weighs his options, and Ada warns him she won't allow him to sacrifice Kawaki. He prepares to leave, releasing Shikamaru and telling Kawaki someone will always manipulate him. Kawaki shrinks his Claw Marks, stopping him from retreating, and keeps doing so as Code creates new ones. He points out he'll kill anyone who is a threat to Naruto, even Boruto, and asks why he'd let him escape. Code dodges Kawaki's attack, and attempts to engage with taijutsu, but Kawaki overpowers him, and Code grows concerned. Shikamaru joins Naruto, who is shocked enough to be unable to maintain Sage Mode, and tries to snap him out of it. He stresses they should help Kawaki deal with Code, and yells at Naruto that Boruto chose this to protect them. Kawaki prepares to blast Code, and warns that if his ally is against Naruto, he'll show them no mercy either. Code reaches through the Claw Mark on his face as Kawaki blasts him. As the smoke clears, Shikamaru is surprised to see Kawaki blown back. Code pulled Daemon through, waking him up, to reflect Kawaki's attack. Daemon is excited to fight, but Code sends him back to Ada.

Heeding Ada's warning, he checks on Kawaki and assures Ada he's alive. She says if he wasn't, she'd send Daemon to kill him. Code begrudgingly admits he's no match for Kawaki as is, decides to have Amado remove his limiters, and leaves. Shikamaru tells Naruto they have to consider how to deal with Kawaki, who killed his comrade without hesitation. Naruto protests it wasn't his fault alone, but Shikamaru is resolute that measures should be taken. He points out they have the other villages to consider, and that even in Konoha, they'll face backlash as there were already negative reactions towards Kawaki. As Kawaki became part of their family, Naruto wants to stand by him, and Shikamaru ponders if he can really do that when Kawaki killed his son. Boruto reaches out to Naruto, asking who was killed, and joking it's rude to write him off. Shikamaru is shocked, and Naruto cries as he hugs Boruto. Shikamaru notices the hole in Boruto's chest is completely healed. Momoshiki's soul manifests itself for Boruto, and explains that his destruction as a vessel would extinguish his soul, so he's too precious for Momoshiki. He used part of the Kāma to resurrect Boruto, rewriting the remaining compressed data with Boruto's data, so it could form Boruto's tissue and heal him. However, in doing so, this makes it impossible for Momoshiki to resurrect in his body, which Boruto takes as a victory. Momoshiki tells him not to get excited, as rewritten or not, all the Kāma data was Ōtsutsuki, meaning Boruto is now a complete Ōtsutsuki, which makes him appropriate to sacrifice to the Ten-Tails, something Code will realise soon. Boruto thinks this will save him time hunting Code down, but Momoshiki warns this resurrection won't happen again, and he'll stay dead next time. He asks if his death is what Momoshiki meant when he first appeared to him in a vision, and Momoshiki laughs it off, saying it's completely unrelated, having no idea of why that will come to pass, but knowing it will happen soon. Back with Ada, she points out to Code that Amado is being protected in the middle of Konoha, where he doesn't have a single Claw Mark. He says he has already taken measures. 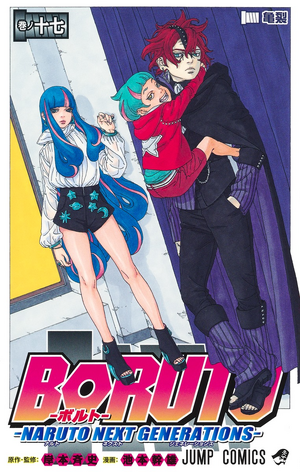