The Rinne Sharingan (輪廻写輪眼, literally meaning: Saṃsāra Copy Wheel Eye) is a dōjutsu kekkei mōra and the predecessor to the Rinnegan and Sharingan. It is characterised by red sclerae and irides, with a ripple pattern spreading over the eyeball and nine tomoe.

This dōjutsu was first manifested by Kaguya Ōtsutsuki as a third eye on her forehead after eating the chakra fruit of the God Tree. It was also possessed by the Ten-Tails, the result of Kaguya merging with the God Tree. According to the stone tablet handed down in the Uchiha clan, when one who wields the power of Rinne approaches the moon, the eye which can reflect off the moon and grant the infinite dream will open. This was proven true when Madara Uchiha, as the Ten-Tails' jinchūriki, was able to manifest this dōjutsu in his own forehead after regaining both of his Rinnegan.[3] As a result of Black Zetsu's actions, Madara's body then served as a vessel for the resurrected Kaguya, who retained the Rinne Sharingan.[4] When Naruto Uzumaki and Sasuke Uchiha later used the Six Paths — Chibaku Tensei to seal Kaguya, her third eye was closed by a horizontal eyelid with the appearance of a sun and moon under the effects of the technique.[5]

The Rinne Sharingan possesses the ocular power of the Sharingan,[6] and can be used to cast the Infinite Tsukuyomi,[3] an extremely powerful genjutsu which can only be countered by the Rinnegan and the chakra of the nine tailed beasts.[7][8] Using this dōjutsu, Kaguya can transport herself and those in her vicinity to a series of alternate dimensions.[9] 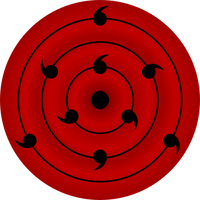