The Rinnegan (輪廻眼, literally meaning: Saṃsāra Eye) is reputed as the most exalted eye amongst the "Three Great Dōjutsu",[3] the others being the Sharingan and the Byakugan. It is said that in times of disorder, one who wields the Rinnegan is sent down from the heavens to become either a "God of Creation" who will calm the world or a "God of Destruction" who will reduce everything to nothingness. The Rinnegan is characterised by concentric circles covering the eyeball.[1]

The first person on Earth to wield the Rinnegan was Hagoromo Ōtsutsuki, whose mother possessed the Rinne Sharingan. In the anime, he obtained his Rinnegan at the same time as his Mangekyō Sharingan, which awakened as a result of mortally wounding his brother.[4] Using the power of the Rinnegan, Hagoromo saved the world from the Ten-Tails and created ninshū, the precursor to modern ninjutsu. For his contributions to the world, Hagoromo became revered as the Sage of Six Paths, and both he and his eyes rose to mythological status following his death;[5] even when the Rinnegan was later proven to exist, some dismissed it as a random mutation.[6]

It is possible to awaken a new Rinnegan by obtaining Hagoromo's chakra, either by combining the chakra of his sons, Indra and Asura, to recreate his own,[7] or by directly receiving it from Hagoromo himself.[8] Black Zetsu spent centuries attempting to manipulate the reincarnations of Indra and Asura into awakening the Rinnegan, but it was not until the time of Madara Uchiha — Indra's reincarnate — that this was successful.[9] Madara implanted the flesh of Hashirama Senju — Asura's reincarnate — into his own body, causing a part of Asura's chakra to combine with Indra's.[7] However, Madara's eyes did not become Rinnegan until decades later, when his natural lifespan was nearing its end;[10] this also restored his right eye's vision, which had been lost from his earlier use of Izanagi.[11] Orochimaru and Kabuto Yakushi later hypothesised that the Sharingan can be evolved into the Rinnegan by combining Uchiha and Senju DNA. To that end, Kabuto successfully recreated the Rinnegan by infusing Hashirama's cells into Madara's reincarnated body,[12] though these fake eyes did not have full access to the original's abilities.[13]

After receiving half of Hagoromo's chakra from his spirit, Sasuke awakened a Rinnegan in his left eye, which contains three tomoe on its two innermost circles for a total of six. In addition to the Rinnegan's power, this eye retains the abilities of Sasuke's left Mangekyō Sharingan, including the ability to cast ocular genjutsu and use Amaterasu.[14][15] If Sasuke overuses the power of his Rinnegan, his ocular power will temporarily diminish, causing the tomoe in his Rinnegan to vanish until his full power returns. During this time, he is also seemingly unable to activate his right eye's Mangekyō Sharingan or use Susanoo.[16]

Momoshiki Ōtsutsuki has a pair of Rinnegan embedded in the palms of his hands. They are initially red, but after he consumes his guardian, Kinshiki, they become purple (in Boruto: Naruto the Movie) or yellow (in Boruto: Naruto Next Generations). This also grants him a third Rinnegan on his forehead, which matches the other two in colour.[17][18][19] In the anime, Momoshiki's yellow Rinnegan temporarily turn red when he uses their power.[20]

Urashiki Ōtsutsuki manifests his Rinnegan in the same pair of eyes as his Byakugan, and can switch between the two dōjutsu at will. Urashiki's Rinnegan are able to take on several forms to access different abilities: at times, they are red and contain six tomoe,[21] while at other times, they are blue with a white ripple pattern while using certain techniques.[22][23] After consuming all of the chakra he had stolen from others, Urashiki removed and devoured both of his Rinnegan, causing him to undergo a transformation. In this form, his eyes were restored, an additional Rinnegan appeared on his forehead, and all of his dōjutsu turned yellow, much like Momoshiki before him.[24]

As with any dōjutsu, the Rinnegan can be transplanted into others. Prior to his death, Madara implanted both of his eyes into the young Nagato without the boy's knowledge, and he was able to make effective use of them throughout his life due to his Senju lineage.[25] After Nagato's death, the Rinnegan were taken by Obito Uchiha,[26] who implanted the left eye into himself and hid the other, knowing he could not handle the power of both eyes at once.[27] Madara later reclaimed both of his Rinnegan after he was revived,[28][29] and they were last seen deactivated upon his death.[30] He was also able to revert his Rinnegan to his Mangekyō Sharingan.[31][32]

Rinnegan contain extraordinarily powerful chakra and boast enormous ocular power, such that an unworthy wielder risks "losing themselves" upon implanting one. Their full power can only be brought out by their original owner, particularly when wielding both eyes, but possession of even a single transplanted Rinnegan can still grant overwhelming power.[27] The Rinnegan is able to see chakra and its flow within the body,[33] as well as otherwise invisible barriers,[34] but cannot see through obstructions such as smoke bombs.[35] Possession of the Rinnegan allows one to easily master any jutsu as well as all five basic nature transformations.[36] The Rinnegan is the only dōjutsu able to fully decipher the Sage of Six Paths' stone tablet.[37]

One who wields the Rinnegan can utilise six abilities collectively known as the Six Paths Technique: controlling attractive and repulsive forces with the Deva Path; mechanically altering one's body with the Asura Path; extracting souls through the Human Path; summoning various creatures through the Animal Path; absorbing chakra through the Preta Path; and access to the King of Hell through the Naraka Path. A seventh ability, called the Outer Path, is said to allow the user to preside over life and death, granting them the ability to revive the dead.[38] The Outer Path also allows the user to transmit their chakra into black receivers,[39] manifest chakra chains to bind the tailed beasts,[40] and create the Six Paths of Pain: six bodies controlled through the use of black receivers, which can each utilise one aspect of the Six Paths Technique. The Rinnegan grants the user a shared field of vision with their Six Paths of Pain, the creatures summoned through the Animal Path, and the King of Hell, all of which possess copies of the Rinnegan in their own eyes.[41][42]

The Rinnegan is the only means of breaking the seal placed on the Demonic Statue of the Outer Path and summoning it,[43] though it cannot be summoned using a fake reincarnated Rinnegan.[13] The dōjutsu is also used to seal the Ten-Tails inside one's body and become its jinchūriki.[44] When one who wields the power of Rinne approaches the moon, they can awaken the Rinne Sharingan and cast the Infinite Tsukuyomi.[45] In turn, another Rinnegan wielder is able to repel the Infinite Tsukuyomi's light, and this protection can be extended to others by using the Rinnegan in conjunction with Susanoo.[46] In order to end the technique entirely, a Rinnegan wielder must form the Rat hand seal together with someone who possesses the chakra of all nine tailed beasts.[47]

Certain Rinnegan abilities have only been demonstrated by single users: Madara can create corporeal shadows in the world of Limbo, which is only visible to the Rinnegan;[48] Sasuke's Rinnegan allows him to shift spaces within a certain range of himself,[49] as well as create portals to other dimensions; Momoshiki is able to absorb any ninjutsu with his right Rinnegan and subsequently release it in an amplified form from his left Rinnegan, as well as transform chakra and living individuals into edibles;[17] when his Rinnegan glow blue, Urashiki can displace himself and transport himself into the past to redo events.[22][23]

Sasuke's Rinnegan has several sciences to it, and one of them is pattern recognition. It helps him analyse patterns inside codes, and by comparing them to similar patterns, decipher what is written. When put into use, he can take large amounts of information from a small amount of text.[50]

The general appearance of the Rinnegan. 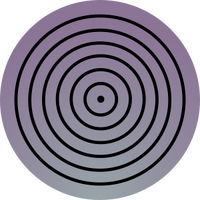