Road to Naruto the Movie 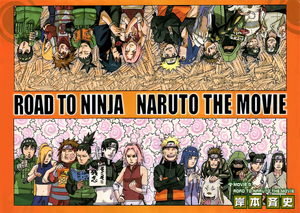 This omake was originally published in Weekly Shōnen Jump 2012 #34 (cover date August 6, 2012). It was later included in Naruto Stealth Volume: Road to Ninja and Jin no Sho.

Tobi speaks with Zetsu about testing out a limited, trial-version of the "Infinite Tsukuyomi", but first notes that he needs to find what the target of the technique desires. Using the Telescope Technique, Tobi finds Naruto Uzumaki in his apartment, bored and playing cards with two shadow clones. Meanwhile, Team Guy returns from a mission, with Tenten suggesting a trip to the public bath. Rock Lee declines her offer stating that he needed to train. During his training, he came across Naruto who was still in his apartment sulking and had the idea to invite him and the rest of the their friends to the public bath. In the baths, Sakura asks Hinata to loosen up, only for her to complain about her sizeable bust, much to Sakura's envy. While the girls bathed, Naruto told the guys that Lee would come after his training. Akamaru, who had sneaked into the bath house as a transformed Kiba, got soap all over the floor, which caused Chōji to slip and roll into the bath. This caused some of the water to flow out and prompted Shikamaru to have Chōji use the Multi-Size Technique in order to get the water level back up. While training on what was the top of the female changing area, Lee falls through the ceiling, getting himself caught by an angry Ino. Naruto, who decided to try to peek at the girls despite Neji's warning, witnessed their angry reactions at Lee, accusing him of being a pervert. Naruto, however, knew that Lee gathered everyone together so that Naruto wouldn't be alone and stood up for him. However, unbeknownst to Naruto, a bra got stuck to the back of his towel, causing Sakura to beat him up thinking he was being an underwear thief. With the trip essentially ruined, Naruto returned to his apartment, still sulky. Later that night, however, the guys came to Naruto's apartment for a game of cards and after they left, Naruto felt depressed as he wished they had stayed for dinner. Deciding this was enough, Tobi declared that he now knows Naruto's desires and, surrounded by seemingly all the other members of Akatsuki, began the limited version of Infinite Tsukuyomi.