Boruto determines Kawaki is beyond Konoha's limit, and questions Kawaki's shadow clone, who tells him not to interfere. Boruto alerts Nishi, who doesn't believe him, still sensing Kawaki's shadow clone. Ada gives Code directions to intercept Kawaki, Code wonders what to talk about with him. Boruto warns Naruto of Kawaki's escape, as well as his erasing his chakra signature to avoid detection. Boruto insists on it, and Naruto has Nishi expand his sensing range and notify Shikamaru. Kawaki's shadow clone disperses frustrated. Kawaki finds Code, who marks him with his claw, closing the gap between them, and asks if he's gained weight. Naruto questions Boruto on his claim, and how he can still sense Kawaki. He confesses having reservations about Boruto's claim, as he has complained about the surveillance. Naruto and Boruto don't find the shadow clone, and Nishi reports that Kawaki's chakra has suddenly vanished. Naruto confers with Shikamaru and Ino, warning them that Kawaki's chakra is currently undetectable.

Boruto can no longer sense Kawaki and wishes to pursue him. Naruto is against it, as Boruto is under surveillance for the same reason, but Boruto argues the Sensing Unit won't be able to find him, and soon neither will he. He slips out when Naruto is still coordinating the search with Ino. Amado and Shikamaru wonder how and why Kawaki left. Boruto goes towards where he last was able to detect Kawaki, hoping they'll track his chakra to find them both. Code and Kawaki fight, Ada reminding Code not to kill him. Kawaki says he left to see him, and confirms that Code wants vengeance against Isshiki's killers. He claims responsibility for Isshiki's death, and offers himself up if Code leaves Konoha alone, saying none of it would have happened if he hadn't fled Kara. Code finds his proposition ridiculous and continues attacking him. He is furious with his begging, seeing it as defilement of Isshiki's rightful vessel. Ada's pleas for Code not to hurt Kawaki wake Daemon up. Code explains to Kawaki he already knows all the details of Isshiki's death, and has inherited his will and plans. He reveals that Kawaki is excluded from his revenge because there's someone who wants to meet him, and prepares to leave with him. Boruto arrives, freeing Kawaki by kicking Code aside. He tells Kawaki to tell him where he's going next time so he doesn't get yelled at. 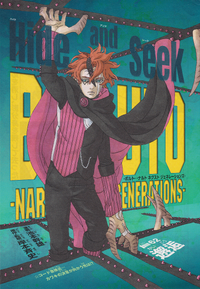