Ryūzetsu belonged to the Grass Flower Group of Kusagakure and was childhood friends with Mui's son, Muku. As children, they both dreamed of resurrecting the glory of Kusagakure. Eventually, she witnessed Mui sacrificing Muku in a failed attempt to open the Box of Ultimate Bliss, leaving only his green scarf. She is seen wearing this same scarf as a bandanna during her trek into Mui's Hōzuki Castle in order to not only stop him from re-opening the Box of Ultimate Bliss, but to avenge Muku's death.

As a result of her childhood friend's murder, Ryūzetsu became a relatively stoic kunoichi who wasn't very easily amused. In addition to being quick-witted, she was also very strong-willed. She had a deep sense of morality and loyalty, as displayed when she refused to let Naruto die in order to prevent Mui from opening the Box of Ultimate Bliss, put her life on the line in order to halt Muku's rampage, jumped in front of Naruto, thus being impaled with him on Muku's claw, and finally gave her own waning life to save Naruto's by using her kekkei genkai to transfer the entirety of her life force from her own body into his.

Ryūzetsu had fair skin, waist-length white hair that is covered by a green bandana that has a long curved white stripe which had belonged to Muku and grey eyes with multiple circular patterns much like Pain's Rinnegan. She wore a sleeveless kimono over a green top that only has a long green sleeve covering her left arm along with the green bandana. Both her arms were bandaged up to her elbows. She also wore black trousers with shinobi sandals. Overall, she disguised herself as a man in order to infiltrate the Hōzuki Castle, and nobody knew of her gender until she took off her kimono to dry off in front of Naruto.

Ryūzetsu was considered a genius by Muku, and she was an Anbu of her village. As shown when she and Naruto initiated a riot, she is quite capable in Taijutsu, further showcased when she briefly engaged Kazan in combat. In line with her status as an Anbu, Ryūzetsu was also a skilled infiltrator, managing, after entering, to practically go as she pleased inside of the Hōzuki Castle without notice.

It should be also noted, that Ryūzetsu possesses very powerful life force, as she was able to remain conscious, move and even use her Kekkei Genkai after getting impaled by Satori, which left a massive hole in her body and destroyed several of her organs, as well as big part of her spine.

Ryūzetsu was capable of using Fire Release to create fire-like apparitions to attack her opponents, even while the Fire Release: Heavenly Prison was reducing her ninjutsu prowess, hinting that she had a very strong chakra. Ryūzetsu was also capable of using her clan’s kekkei genkai, which allowed her to heal or restore life in exchange for her own.

Ryūzetsu first met Naruto in the Hōzuki Castle as a fellow prisoner, warning him not to get himself into more trouble than he already is in. Later, when Naruto attempted his second escape by jumping off the cliff and into the raging ocean, Ryūzetsu followed him and warned him not to, to which he ignored and did anyway. She then jumped after him and saved him. After taking shelter, and Naruto suggested she was a male transvestite, she slapped him and revealed to him that she's a woman. Telling the young ninja of her mission, they formed an alliance to take down Mui and the Box of Ultimate Bliss.

She later attempted to assassinate Mui while he was sleeping, but it was Maroi in disguise; this encounter allowed them to form another alliance. During a prison riot Maroi started, Ryūzetsu took advantage to attack Mui, but it turns out to be Kazan in disguise, by which time the real Mui brought the Box to the prison yard, with Naruto's chakra to open it. Ryūzetsu was surprised to hear that Mui's wish was to see his son once again, instead of reviving Kusagakure, and was horrified when Muku, who came back out of the box, became corrupted by Satori and impaled his father.

Throughout Satori's rampage, Ryūzetsu kept trying to reason with Muku, with Satori's ability of sensing fear and killing intent being ineffective against her, due to her lack of either. Eventually, when Satori thrust his claw at Naruto, Ryūzetsu jumped forward to block it, only for both of them to be impaled. Naruto eventually defeated Satori and Muku with the Wind Release: Rasenshuriken with Mui's help, and Muku and Mui died together. Ryūzetsu remembered her old times with Muku, and shed tears for his death. When Naruto's stab wound was too much for Sakura to heal, Ryūzetsu stepped forward with her Dragon Life Reincarnation to save Naruto's life at the cost of her own. As she passes away, she kisses Naruto and entrusts him to continue on with her life's will. She and Mui were then buried outside the Hōzuki Castle, with Muku's bandanna tied around her gravestone. 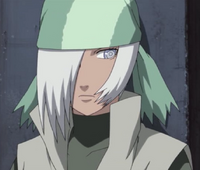