With both Sasuke and Danzō wounded, the battle is over. Although Danzō believes Izanagi protected him from harm, thus making him the victor, he finds that he has been hurt; Sasuke used a genjutsu to make it look like Izanagi was still active. Karin heals Sasuke's wounds. Badly injured, Danzō loses control of the First Hokage's DNA that allows him to use Wood Release and he is forced to remove his arm. Determined not to lose, Danzō takes Karin hostage to buy his escape. Although Karin thinks that Sasuke will try to save her, Sasuke instead stabs through Karin, fatally wounding both her and Danzō. 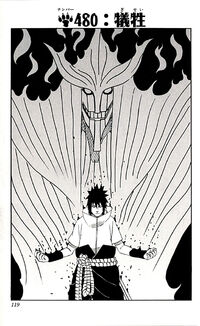