Sacrifice (生贄, Ikenie) is volume 13 of the Boruto: Naruto Next Generations manga.

Isshiki finishes shrinking the remaining pillars at their location. Koji breathes fire at him, but he harmlessly shrinks them as he approaches. Koji grabs him with his hair and tosses him on the ground, but Isshiki shrinks and escapes. Koji tries stabbing him with his hair when Isshiki is close to him, but he evades it as well. Isshiki ponders that with the body he has, he only has two or three days of life left, and praises Amado's planning. He taunts Koji that Amado likely intends for Naruto and Sasuke to defeat him, and that means Koji's role was done the moment he forced Isshiki to resurrect in Jigen's body, lacking the strength to actually kill him. He'll make Koji understand he can't be a heroic ninja tool, being a sacrificial pawn instead. Koji enters Sage Mode. Amado goes over the terms of his asylum agreement, the limitations and obligations imposed on him. Shikamaru requests that he disarms the bomb on Shikadai's neck, and Amado reveals it was a bluff on his part. Turning to Naruto, he stresses the hard part has yet to come. He advises them against going to fight Isshiki, as with his limited time, his priority will be to apply another Kāma to Kawaki, so he might even ignore Naruto and Sasuke if they take the fight to him. Amado suggests evacuating Konohagakure civilians. He also advises hiding Kawaki, somewhere close where Naruto and Sasuke can protect him if his location is exposed. Isshiki must be defeated before applying another Kāma to Kawaki.

Koji keeps using Fire Release jutsu, meaning to get around Isshiki's dōjutsu by blocking his sight. He manages to pin Isshiki between flames and an Ultra-Big Ball Rasengan. Isshiki produces the previously shrunk stone pillars, pinning Koji down. Koji notes his injuries as Isshiki explains the nature of his jutsu. Isshiki wonders why Koji kept fighting, and offers to deliver his last words to Amado, as a courtesy of a former comrade. He approaches to hear Koji's words, but he summons a toad and escapes by reverse summoning it instead. Isshiki wonders what Koji intends to do and portals away, intending on finding Kawaki. Boruto wants to fight Isshiki along his father, noting that both Naruto and Sasuke lost to him when he was weaker. Sasuke points out both he and Naruto have always been ready to die for Konoha, and asks if he's the same. Naruto is notified of Isshiki's arrival at Konoha.

Konoha civilians notice Isshiki floating above them. Shinobi inform them of an emergency alert and issue evacuation orders. Isshiki looks for Kawaki with his Byakugan. Via Ino, Shikamaru warns all the shinobi that only Naruto and Sasuke are to engage Isshiki in combat. Naruto leaves to fight Isshiki, and tells Boruto he's also to evacuate. Isshiki questions Konoha shinobi about Kawaki's location, threatening to attack civilians. One of them confesses that they don't have the information. Shikamaru wants to leave, Sai grabs the unconscious Kawaki, and suggests hiding in an old, secret Anbu underground facility. Shikamaru wants Amado to come with them, who expresses concern for Isshiki's Byakugan finding them out. Sai reassures him that the facility is protected against such abilities. Shikamaru thanks Sasuke, and tells Boruto to come along. Sasuke wants to have a word with Boruto first. Isshiki is surprised to find Naruto out of his seal. Sasuke confesses to Boruto that he and Naruto barely made any damage to Jigen before. He explains that Sarada told him what happened during the fight against Boro, and having heard Amado's explanation, Boruto knows it was Momoshiki who defeated him. Sasuke raises the possibility of Boruto's Kāma starting to override him. Boruto is prepared to die fighting, even if it scares him, but he is worried about what he might do if his body is taken over.

Naruto refuses to tell Isshiki where Kawaki is, so he puts civilians in danger. The two start fighting. Isshiki kicks Naruto through a couple buildings. Sasuke switches places with Isshiki. Isshiki reminds them how he defeated them before. Sasuke instructs Naruto to cover with shuriken and kunai. They both use them, though Isshiki shrinks them. Sasuke throws his sword, which Isshiki can't shrink, surprising him. The sword transforms back into Boruto, who has his Kāma activated. Sasuke promised to Boruto to stop him if Momoshiki takes him over, even if he has to kill him, making the promise as his teacher as Naruto probably wouldn't be able to do it. Boruto asked for Sasuke's forehead protector again. Boruto uses his Kāma to create a rift, taking himself and Isshiki away from Konohagakure. Sasuke tracks Boruto's chakra. Isshiki wonders how much of Momoshiki's Kāma Boruto can use. Sasuke and Naruto arrive at their location, where Boruto tells them they can fight all out. They all prepare to fight.

Naruto questions Boruto about their location. Boruto explains that he used the Kāma to take them to another dimension, and confesses that he doesn't know where they are, being more concerned with keeping Isshiki from destroying Konoha. Naruto thinks Boruto got this attitude from him. Isshiki rushes at them and grabs Boruto. He inspects Boruto and determines the decompression of Momoshiki's Kāma on him to be about 80% complete. Sasuke switches positions with Boruto and attempts a Chidori, but Isshiki grabs his arm and kicks him aside. Isshiki reasons that if he simply returns to Konoha, they'll merely chase him there, and decides to kill them there, hoping it'll break the villagers' will and they'll reveal Kawaki's location. Naruto is insulted by the idea. Kawaki dreams of Jigen's words before waking up next to Amado. Shikamaru receives reports that Naruto's, Sasuke's, Boruto's and Isshiki's chakra have disappeared. Kawaki notices his Kāma has disappeared, and Amado updates him on what has happened since he passed out. Shikamaru claims he is now free, but Kawaki points out Isshiki is still after him to brand him again. Kawaki is concerned about Isshiki being out there, but Amado points out he can only survive in Jigen's body for a few days, and they only need to avoid him branding Kawaki again.

Naruto attacks Isshiki, who shrinks his Rasengan. Boruto cheers Naruto as he assaults Isshiki with chakra arms. Isshiki attacks from behind and Naruto resorts to shadow clones. Naruto holds Isshiki in place with chakra arms for Sasuke to land a Chidori, but Isshiki manifests several blocks and attacks, destroying Naruto's clones. Sasuke determines the blocks to be separate from Isshiki's shrinking abilities. He blocks Isshiki's attacks with his sword, but Isshiki shrinks it out of his grasp, knocking him down, and enlarges the sword again to kill him. Boruto notices Sasuke's dire situation and rushes at them. Shikamaru relays the others witness reports of what happened. Katasuke is concerned that Boruto isn't strong enough to oppose Isshiki, but Amado speculates Boruto has become aware of his potential value against Isshiki. Isshiki freezes when Boruto puts himself between him and Sasuke, allowing Boruto to take him to safety. Isshiki asks if Boruto wants to die, but Boruto calls his bluff, asking why he didn't kill both of them in one strike when he had the chance. He determines that Isshiki can't kill him. Amado thinks that Boruto is the key to defeating Isshiki.

Isshiki asks why Boruto thinks he can't kill him. Boruto thinks he's being obvious. Sasuke asks for an explanation. Boruto tells Sasuke what he learned about their plan from when he fought Boro. Sasuke links it to what Amado revealed about Isshiki's intentions, and Boruto concludes he's part of it, so Isshiki can't afford to kill him. In Konoha, Amado continues explaining Isshiki's plan, and reveals that for a Ten-Tails seedling to take root and grow into a God Tree, a living Ōtsutsuki must be fed to it. Isshiki muses on Boro having been defeated. Sasuke reveals they know of his plans, but Isshiki is indifferent, as he doesn't think they have the power to stop him even if they have the knowledge. As Isshiki approaches, Boruto threatens to kill himself with a kunai to stop his plan. Amado explains the reason Ōtsutsuki invade in pairs is so that one becomes a sacrifice for a God Tree, and the other one watches over it until it bears a chakra fruit. Katasuke questions how desirable the chakra fruit must be for the Ōtsutsuki to be willing to sacrifice themselves for it, but Kawaki reminds him that they have Kāma, Amado adding that the sacrificial Ōtsutsuki generally prepares a vessel for resurrection ahead of time. Sumire asks if this was Isshiki's and Kaguya's plan. Amado believes so on Isshiki's part, with Kaguya being the sacrifice as she was of a lower position in the clan, but she turned against him, so Isshiki would have had to carry on solo, sacrificing himself as he had no other Ōtsutsuki.

Sumire realises Isshiki means to sacrifice Boruto. Amado praises her deduction skills. Isshiki is unimpressed by Boruto's threat, and shrinks out of sight. He shrinks Boruto's kunai, and Sasuke tells him to run so they can buy enough time to run out how long Isshiki has left with Jigen's body. Isshiki reappears and attacks Sasuke, causing Boruto to retaliate. Isshiki shrinks Boruto's Rasengan and breaks his arm, being ok with hurting him even if he doesn't intend to kill him. He kicks Boruto aside and since he said he's ready to die, Isshiki explains he'll be fed to the Ten-Tails. Amado explains that there exist variations in chakra fruits, and a powerful Ōtsutsuki created from a younger vessel will provide better sustenance to a God Tree than one from a spent vessel like Jigen, which will lead to a better chakra fruit. Shikamaru wonders how that helps Boruto in defeating Isshiki. Kawaki angrily asks how much of the situation Amado has plotted, noting his calm disposition. Amado merely states that he makes the best choice available to him, and that it's important to be prepared to accept the consequences of that choice, just as everyone does. Amado wonders if Kawaki's irritation stems from being powerless or grief over losing his Kāma. Naruto can't sense Isshiki, Sasuke, or Boruto, and Kurama believes that Isshiki's cubes interfere with sensing. Kurama asks what Naruto's plan is, but he doesn't have a real one. Kurama has an idea that is only worth considering since Naruto is already expecting to die anyway, and it's not a choice to make lightly. Isshiki finishes telling Boruto his plan. Naruto kicks him aside. Isshiki is willing to let him live if he reveals Kawaki's location. Naruto gives Kurama the go ahead for the plan. Both Isshiki and Sasuke are impressed by Naruto's chakra. 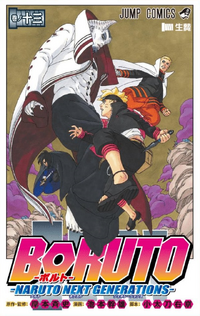