Naruto is finally able to enter Sage Mode on his own, allowing him to begin training to use it in combat. After sparring with Fukasaku, Naruto practices with his technique. In Konoha, the investigation into Pain is still ongoing. Inoichi is called upon to probe the mind of the Amegakure ninja that Jiraiya captured. Shizune also analyses the body piercings present on the Pain that Jiraiya defeated. On the outskirts of the village, the Six Paths of Pain arrive. 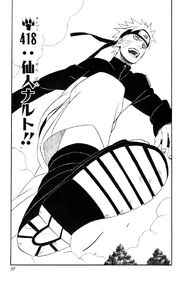