"Sakon's Secret" (左近の秘密, Sakon no Himitsu) is chapter 203 of the original Naruto manga.

Naruto's shadow clones attack, but Kimimaro, preparing his kekkei genkai, is not concerned. Elsewhere, Sakon, with the help of his cursed seal, and Ukon overpower Kiba. Interested in ending the battle quickly, Ukon advances his cursed seal to its second level and forces Sakon to do the same. Akamaru knows they are outmatched so he convinces Kiba to perform a joint combination. Taking on the form of a double-headed wolf, Kiba and Akamaru attack the joined brothers with their new technique. Meanwhile, Shikamaru struggles to avoid the Doki's attacks, but is able to notice that Tayuya controls them with her Demonic Flute. 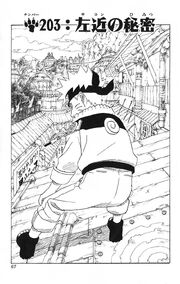