Naruto #32
"Sakura and Ino" (サクラといの, Sakura to Ino) is chapter 54 of the original Naruto manga.

Sakura, no longer concerned for her own safety, launches an attack against Team Dosu. Although she makes dexterous usage of several basic ninjutsu, she is ultimately forced to resort to biting and other physical attacks. Seeing Sakura's determination, the nearby Ino thinks back to her childhood with Sakura; how the two used to be good friends. After Ino helped, Sakura gained some much-needed self-confidence, they parted ways so that their friendship would not interfere with their competition as rival ninja and love-interests for Sasuke. Seeing that Sakura is beating her in both aspects, Ino forces her Team 10 to come to Sakura's rescue. 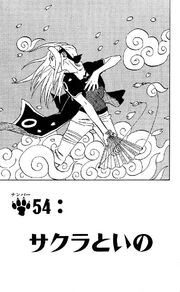