San (参, San, literally meaning: "Three") was an antagonist who appeared in Naruto Shippūden the Movie: The Will of Fire. He was one of Hiruko's three nameless, numbered followers. (With Ichi and Ni).

San, like his teammates, was extremely confident in his own abilities. He also didn't listen to reason even if it may have been in his favour.

San had light-coloured eyes and brown hair. He almost perfectly resembled his teammate, Ichi, except that he had three rectangular marks on his forehead, his bangs on his right side, and that while San wears his cloak on the left side of his shoulder and straps from the right shoulder going down, Ichi wore them the opposite direction. This cloak of his had the same three rectangular markings on it that were on San's forehead. It is unclear if the two of them were twins.

He can summon a bird-like creature that has many modifications. It can shoot feathers and exploding projectiles with pin-point accuracy. The creature also had jet-like modifications that allow it to have short bursts of speed. San can summon Ichi, and Ni to merge with him via the Chimera Technique. The merged beast was a combination of all their summoned animals with all their abilities. He also appears to be able to break the Mind Body Switch Technique that Ino Yamanaka deployed immediately.

He fought Team Asuma, Naruto, and Sakura until Sai rescues them. Shikamaru and his teammates fought him with their formation. Ino tried to explain their reason of coming but it did not work. After he merged with Ni and Ichi, the chimera beast was restrained by the Konoha 11, without Naruto and Sakura, before being summoned by Hiruko. The Konoha 11 fought it again, defeating it this time, thus killing him. 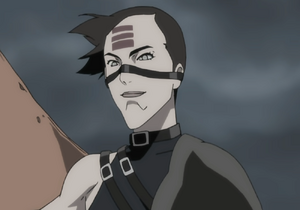