Santa is a slim, fair-skinned man with slanted, dark eyes and very long, auburn hair which reaches well into his back. He ties it into a high ponytail. He wears the standard attire of a Konoha shinobi, inclusive of flak jacket as well as the Allied Shinobi Forces' forehead protector.

He is proficient in his clan's technique's displayed when he used the Mind Body Switch Technique to exchange bodies instead of just transferring his consciousness into Kakashi Hatake's body.[2] Even amongst the Yamanaka, Santa has been noted to be a keen sensor and can excel in battle even without the use of sight.[1] This keen perception was put to good use during the Fourth Shinobi World War where Santa was able to switch bodies with Kakashi and position his captain's body — through the use of the Sensing Technique — where Kakashi could land a devastating blow on the target.[2]

Santa was placed in Third Division of the Allied Shinobi Forces. He was incorporated into Kakashi's battle strategy in order to gain the upper hand in the fight against the reincarnated shinobi. Because of the mist that hung on the battlefield, visibility was very low hence Santa switched bodies with Kakashi and used his sensory abilities to position Kakashi's body behind Zabuza Momochi's. He then cancelled the technique allowing Kakashi to opportunely strike a blow on the opponent. However, the blow was intercepted by Haku. Santa was worried that Zabuza had taken down Kakashi when Ensui Nara said he only managed to stop one enemy as the contact time with the other shadow was too short to activate his own technique.

In the anime, when dawn broke on the second day of war, Santa was amongst the group of shinobi fighting against Jinin Akebino.[3] 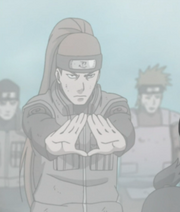