Sari (サリ, Sari) is a genin from Sunagakure.

She is close friends with Matsuri and like her, she has a strong admiration for the Kazekage, even going as far as to volunteer for the mission to save him.

Sari has large brown eyes and long brown hair parted in a bang that falls in the middle of her face. Her attire consists of bandanna-style forehead protector, a beige-coloured, high-collared shirt and she has bandages wrapped around her waist, a purple-coloured skirt with slits in the side. She also wears a blue pair of thigh-high stockings, arm-guards and sandals.

Sari can be with Matsuri, among others from Sunagakure who come together to rescue Gaara after he is captured by the Akatsuki. Both girls are relieved to see Gaara alive and states to Ittetsu that Gaara is the strong, silent elite type that could never be killed so easily. She and Matsuri then rush to Gaara's side, knocking Naruto down in the process.

Sari can be seen standing just in front of Baki, Ebizō, Matsuri, and other villagers seeing Gaara, Kankurō and Temari off as they leave to the Kage Summit, telling the older siblings to take good care of Gaara.

Sari appears in Gaara's thoughts along with several other villagers, including his siblings and Baki, when he thinks of the members of Suna, stating that his villagers lives now "belong to him" and he considers it his duty to protect them. 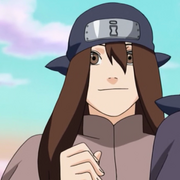