Deidara's C0 destroys the area. The members of Hebi, Team 7, and Team 8 see the resulting explosion. Zetsu, having watched the battle, reports the deaths of Deidara, Tobi, and Sasuke to the rest of Akatsuki. Meanwhile, Suigetsu summons Manda to confirm his suspicions; Sasuke summoned Manda at the last second to act as a shield from Deidara's attack. It worked, though Manda dies from his injuries. They regroup with the rest of Hebi. Elsewhere, the Akatsuki leader, Pain, is instructed to capture the Nine-Tailed Demon Fox. 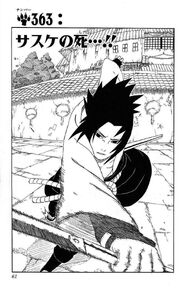