Sasuke and Sakura: Friends or Foes?

"Sasuke and Sakura: Friends or Foes?"edit

"My Name is Konohamaru!"

"Sasuke and Sakura: Friends or Foes?" (宿敵!?サスケとサクラ, Shukuteki!? Sasuke to Sakura) is episode 3 of the original Naruto anime.

All of the genin graduates arrive at the Academy for their orientation. Sakura spots Sasuke sitting down and runs over to him, knocking down Naruto in the process, and asks if she could sit next to him. However, Ino comes over and states that she should be the one to sit next to Sasuke before many of the other girls do the same thing. Upset over the attention Sasuke is getting from the girls, Naruto gets on top of the desk and glares at Sasuke, with the latter returning the favour. Suddenly, Tobio accidentally bumps into Naruto, causing him to fall forward and kiss Sasuke, much to the girls' dismay. As a result, Naruto gets pummelled by them, because they were angry that they weren't Sasuke's first kiss.

After Iruka arrives, he explains the next step that the genin will take, explaining that they will be in a team of three led by a jōnin. He then announces that Naruto, Sakura and Sasuke will be Team 7; Hinata, Kiba and Shino will be Team 8; and Ino, Shikamaru and Chōji will be Team 10. Naruto abruptly asks Iruka why he had to be on a team with Sasuke before being told that he had the worst scores of all the graduates, while Sasuke had the best, so in turn, they were put together to create a balanced group.

During lunchtime, Sakura tries to find to Sasuke to ask him to have lunch with her to no avail. She then runs into Naruto who asks her to have lunch with him, but she coldly dismisses him. Angered yet again, Naruto ambushes Sasuke through an open window. The ending results shows Sasuke standing over a gagged and bound Naruto, but is later revealed that Sasuke only defeated a substitution before the real Naruto overpowers him with the Shadow Clone Technique. Naruto then transforms into Sasuke and heads out to find Sakura. When he finds her, he asks her what she thought of Naruto. She replies by saying that he was annoying. Sakura then leans in to kiss Sasuke, but as they are about to kiss, Sasuke is forced to go to the bathroom.

When the real Sasuke manages to escape, he runs into Sakura and asks if she's seen Naruto. Brushing off what he asked, she proceeds to mock him, believing that he's so annoying because he had no parents to teach him how to behave and that he was all alone. This sparks Sasuke to remark that Sakura had no idea what it felt like to be alone before saying that she was annoying. This causes Sakura to have some resolve for Naruto, deciding to be nicer to him.

After Naruto finishes using the bathroom, he runs into Sasuke, much to his surprise. Naruto uses the Shadow Clone Technique in an attempt to attack Sasuke, but is unable to proceed due to having to use the bathroom again. After finishing, he spots Sakura who is strangely being nice to him. This leads him to believe that it was Sasuke transformed as her, and is prepared to face off against her until he has to use the bathroom yet again.

At Naruto's house, the Third Hokage briefs Kakashi on the team he will be leading, Team 7. Kakashi examines a carton of milk and states that it was spoiled, which is the reason Naruto had to run to the bathroom so much. Kakashi then comments on how much of a problem Naruto would be. 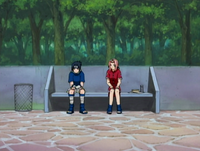