Satori (サトリ, Satori) is a demonic, bird-like creature that appears in Naruto the Movie: Blood Prison.

According to Gamabunta, the Box of Ultimate Bliss "brings forth", "actuates", and "ends" with Satori. Beyond that, like the Box, Satori's history is overall a mystery. Little is known about Satori except that it has been around since the time of the Sage of the Six Paths and that Satori is merely a puppet of the Box. A person who enters the box and comes back out will become the host of Satori, gaining the demon's powers while having their mind corrupted, and Satori will proceed to throw victims into the box.

The beast is large, similar in size to Gamabunta and the Eight-Tails, with large wings. It is headless, with bones potruding from the mouth on its chest and is covered in black feathers. It also has a long thin tail, and its hands and feet are clawed and sickly thin to the point where it looks almost bone-like with skin attached.

It can shoot its feathers and giant spheres at high speeds which have powerful piercing and explosive power, respectively. Despite its large size, it is a deceptively fast and agile flyer. Due to the Box of Ultimate Bliss, its body can detect fear and blood lust, which causes it to instinctively dodge essentially all attacks from opponents who have any fear in them or who desire to kill him. This ability, combined with its surprisingly agile reflexes, allowed it to dodge all of the attacks from the entirety of the Konoha 11 and Naruto Uzumaki, even while he was in Sage Mode.

After Mui asked the box to release his son Muku, the boy walked out of the box and struck down his father. When Ryūzetsu, Muku's childhood friend, made herself known after Mui was struck down, Muku became conflicted and transformed into Satori. After transforming into the beast, he began attacking the prison, throwing inmates and the four Hōzuki Castle council members into the box, which led to his confrontation and battle with Naruto and his allies.

Eventually, Satori impaled Naruto and Ryūzetsu through their abdomen with his claw, to which they used to their advantage to prevent Satori from evading attacks and pin him down, allowing Mui to use the Fire Release: Great Fire Heavenly Prison to further restrain Satori, leaving him open to Naruto's Wind Release: Rasenshuriken. Seemingly returning to normal, Muku was once again taken over by Satori, killing Mui. Muku then used the Fire Release: Demon Lantern to trigger the Heavenly Prison seal on his own body, killing himself and sending Satori back into the box. The box, with Satori contained, was then cast into the whirlpools outside the Hōzuki Castle, where it will never be opened again. 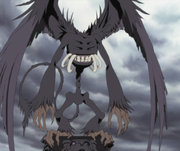