Scrolls (巻物, Makimono) remain one of the most important pieces of equipment in a ninja's arsenal. The average-sized scroll is small enough that several can be carried at the same time, either in a flak jacket or in a pouch. Larger scrolls are usually carried on the ninja's back.[1] In addition to writing on scrolls, ninja use them to summon creatures, people, and items, making transportation easier and providing more options when on a mission. Some techniques can also be stored in scrolls.[2]

The scrolls are an integral part of the Shinobi Gauntlet, a high-tech, forearm-mounted ninja tool that allows users to store techniques inside scrolls, which are then shrunken to pill-size and put inside the Kote. Afterwards, they can release the scroll and use any sealed techniques within the scrolls without chakra. 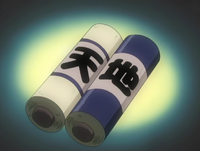