Sekiei showed to be an opportunist, using the chaos created by the Konoha Crush to obtain the Byakugan. He had proposed to his partner that he should kill Hinata Hyūga in order to take her Byakugan back to Kumogakure, meaning that he had no moral qualms about killing the young genin. He also proved to be a cautious individual, not allowing his opponents the chance to catch him by laying a number of traps, as well as hinder their movements during combat, even if that opponent were much younger than himself and a genin.

Sekiei had short brown hair that framed his face and dark eyes. He wore a grey suit underneath the old-style flak jacket of his village and wore his forehead protector like a bandanna. He also wore a sash around his waist and a pair of brown gloves.

Sekiei was a competent shinobi, capable of escaping Konohagakure, albeit in the middle of a great battle, with a prisoner. He was very analytical, noticing that Neji Hyūga was mainly a taijutsu type fighter, and used a series of techniques to bind him, thus disabling his techniques.

Most of Sekiei's battle tactics revolved around his use of the earth nature and he used this in several ways to combat his foes, from laying skilful traps that reshaped itself, to direct combat with large enduring earth techniques and more subtle clones for diversions.

When the Suna and Oto ninja attacked, Sekiei and his partner took advantage of the ensuing mayhem to kidnap an unconscious Hinata Hyūga. Their purpose was to learn the secrets behind the Byakugan. They were later pursued by Neji Hyūga, Kiba Inuzuka, Akamaru, and Tenten at the behest of the Hyūga Elder, who was unsuccessful in stopping the pair earlier. Despite managing to delay the pursuing genin with a trap, Neji, Kiba, and Akamaru eventually caught up with the two while Tenten remained behind. When Neji began fighting him, he was quickly overpowered. His escape, however, was halted long enough for Hiashi Hyūga to arrive and intervene, easily defeating Sekiei and rescuing Hinata. 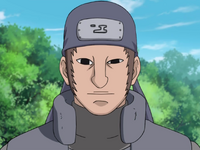