Sensing Barrier Pass Technique
The Sensing Barrier is a giant, dome-shaped barrier placed over a designated area. The barrier is not visible to the standard eye; when viewed with certain dōjutsu, it can be seen that there is a design of several circles which have the kanji for boundary (界), and barrier (結界, kekkai) inscribed in them. When linked with a Sensing Water Sphere, all unauthorised passage in and out of the barrier can be detected and pinpointed. 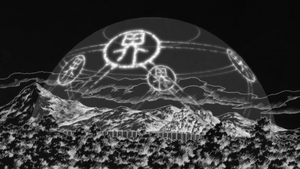