Setsuna was an Uchiha Shinobi who had doubts about the Second Hokage. He planned to reclaim power from the Senju clan.[1]

He had spiky, dark hair and dark eyes. He wore the typical Uchiha outfit consisting of a black, high-collared shirt and a pair of pants. He also wore a face guard that only covered the right side of his forehead and the right side of his face and a brown sash over his shoulder which held his rather large sword strapped to his back.

Being part of the Konoha Military Police Force, he was a fairly skilled shinobi and was probably skilled in kenjutsu due to the sword he wielded. He also managed to awaken his clan's kekkei genkai, the Sharingan, which granted him many benefits like the ability to see the chakra flow or copying techniques he witnessed. 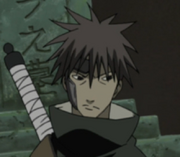