A technique that implements the Sexy: Girl on Girl Technique. A technique that excites women sexually by changing into two naked men. Unlike when changing into girls, other things are vital besides proportions, like the selection and combination of the men one transforms into and how they pose. By being well acquainted with the person the technique is targeted to and adjusting the transformation accordingly, one can deliver an even greater impact.

When Sakura angrily admonished the effectiveness of perverted techniques (specifically, that only perverted people would fall for its intended distraction potential), Konohamaru quickly created this technique to spite her and prove a point. Oddly enough, he was successful. 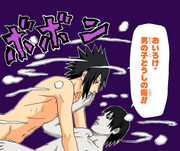