Naruto's Harem Technique, as arranged by Konohamaru, it is consecutively using the Shadow Clone Technique and Transformation Technique, but by having the user himself and the shadow clone change into different people on the moment of transformation. Because several different seducing girls appear, the chances of meeting the preferences of the target are upped significantly. Konohamaru has invented an alternative form of the technique to work on females, Sexy: Boy on Boy Technique.[2] 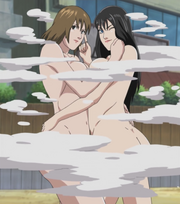