Naruto Uzumaki created this technique in order to play pranks on men. The user transforms into a beautiful woman, with special attention given to the woman's figure, breasts, and waist.[1] When Naruto teaches this technique to Konohamaru Sarutobi, Konohamaru initially struggles to take an attractive form;[2] in the anime, Naruto helps him improve by having him look at naked women.[3] With practice, Konohamaru is eventually able to use this technique effectively, though Rin no Sho describes his version as not having the same "wow" factor as Naruto's.[1]

Certain types of men are very vulnerable to the Sexy Technique: the Third Hokage gets a severe nosebleed, causing him to pass out;[1] Jiraiya remains conscious, but agrees to do anything the user - typically Naruto - asks him to do.[4] On the other hand, Ebisu only blushes to see it and is otherwise unmoved; for cases such as these, Naruto created the Harem Technique, which does indeed defeat Ebisu.[2] Because the standard Sexy Technique has no effect on women, Konohamaru eventually creates the Sexy: Boy on Boy Technique to specifically appeal to them. 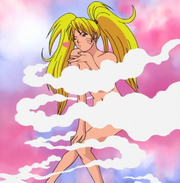