The Sharingan (写輪眼, literally meaning: Copy Wheel Eye, meaning (Viz): Mirror Wheel Eye) is the dōjutsu kekkei genkai of the Uchiha clan that appears selectively among its members.[1] It is regarded as one of the "Three Great Dōjutsu", the others being the Byakugan and the Rinnegan.[2] While its powers originated from Kaguya Ōtsutsuki's Rinne Sharingan, its independent form was first manifested by Indra Ōtsutsuki[3] (Hagoromo Ōtsutsuki in the anime).[4]

When a wielder of this kekkei genkai experiences a powerful emotional condition with regards to a person precious to them, their brain releases a special form of chakra that affects the optic nerves, transforming the eyes into Sharingan; for that reason the Sharingan is described as an "eye that reflects the heart" (心を写す瞳, Kokoro o utsusu hitomi).[5] Often, as per the Uchiha's so-called "Curse of Hatred", this emotion is a negative one, brought on by stress or loss.[6] The emotion can also be positive, driven by a desire to protect[7] or reunite with a loved one.[8]

In the anime, it was shown that usually after first acquiring this power, the user's enhanced perception will throw off their timing, causing them to overstress their bodies from trying to keep up with the increased reaction time, forcing the user to adjust to properly move with it.[9] A higher control of one's chakra is also required to maintain its power for long.[10] It was also shown during emotional states that begin to trigger the Sharingan's awakening, it can temporarily blur the person's eyesight until finally manifesting.[11] Assuming that the user is aware they have awakened the Sharingan,[6] they are thereafter able to freely use it.[12] When first awakened, each Sharingan usually will have only one tomoe (巴), although in some case, they immediately gained two tomoe in each of their eyes. Through emotional growth of extreme conditions, the Sharingan will continue to develop, its full maturation represented by a third tomoe. When Hagoromo awakened the Sharingan in the anime, he had all three tomoe immediately. All the Sharingan's abilities are available to the user from its earliest stage, but with greater development comes greater proficiency with those abilities. Example, with full maturation, the Sharingan's ability to perceive all targets and events around them is fully developed, which can cause the user's movements to drastically differ from their earlier movements if their Sharingan matured mid-battle.[13]

As with any dōjutsu, Sharingan can be transplanted into non-Uchiha.[14] They are unable to deactivate it and its use has a greater chakra demand for them than for actual Uchiha, who need only minimal chakra to keep it active. For these reasons, non-Uchiha tend to cover their Sharingan when they aren't using it in order to conserve chakra.[15] Sharingan that originate from the same Uchiha are still linked to some extent even when wielded by separate users, at times enabling those users to see the same things.[16][17]

The Sharingan grants the wielder two broad abilities: the "Eye of Insight" (洞察眼, Dōsatsugan) and the "Eye of Hypnotism" (催眠眼, Saimingan).[18] Although the abilities are not literally restricted to certain eyes, Madara Uchiha noted that the Sharingan can only be used to its full potential when both eyes are together.[19] Even within these two categories, there may exist several distinct though similar abilities:

In addition to these abilities there are two other jutsu that a Sharingan user can perform: Izanagi allows the user to warp reality for a short time, changing reality into illusion and illusion into reality, thus escaping death and rewriting destiny;[33] Izanami traps the victim in an infinite loop disregarding the target's five senses, specifically designed as a reprimand for those who would abuse Izanagi.[34] Use of either ability causes the Sharingan with which it is performed to be blinded afterwards, and for that reason the Uchiha classified them as kinjutsu. 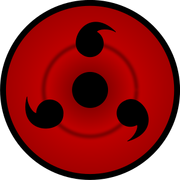