Shikamaru's Battle!! (シカマルの戦い!!, Shikamaru no Tatakai!!) is volume 37 of the Naruto manga.

Naruto uses shadow clones to help him create his new technique, removing the need for him to do nature transformation and shape transformation at the same time. His training is interrupted by news of Asuma's death. Shikamaru personally informs Kurenai of of what happened to Asuma, telling her his last words, but then does not attend Asuma's funeral with the rest of Konoha. He instead smokes Asuma's cigarettes, practices with Asuma's Chakra Blades, and plays shōgi. Once ready, he sets out with Ino and Chōji.

Tsunade stops Team 10 from leaving, telling them that, despite their desire to avenge Asuma, they are ill-suited for a rematch with Akatsuki. Kakashi appears and volunteers to help, saying he can give no additional help with Naruto's training, so Tsunade allows them to go. While Akatsuki is finishing the sealing of the Three-Tails, Shikamaru integrates Kakashi into their plan. Tsunade also considers sending backup for Kakashi and the others, but will only send Team 7 if Naruto can complete his training within twenty-four hours.

Shikamaru tells Kakashi, Ino, and Chōji the plan he has come up with. After the Akatsuki finishes extracting the Two-Tails from Yugito, Hidan and Kakuzu begin heading to Konoha. Team Asuma intercepts them and Shikamaru, using Asuma's Chakra Blades, immobilses them both.

Shikamaru catches Hidan with his shadow and forces him to attack an immobilised Kakuzu. Kakuzu is able to free himself at the last moment, but Shikamaru uses Hidan to drive him into a corner. In Konoha, Naruto nears completion of his new technique. While taking a break, Yamato tells him that all elemental affinities are naturally strong and weak to other elements. He points out that Naruto's Wind Release is weak against Sasuke's Fire Release, but Naruto reinterprets that as his Wind Release making Sasuke's Fire Release stronger. Meanwhile, Kakuzu uses an earth-based defence to protect himself. Kakashi uses his Lightning Cutter, which is naturally strong against earth, to pierce through the defence.

Kakuzu collapses. Kakashi turns his attention to Hidan and tries to finish him too, but is repelled by Kakuzu. Kakuzu reveals that he has four extra hearts stored within masks on his back, only one of which Kakashi destroyed. Shikamaru is forced to release Hidan, and Hidan wastes no time in engaging Kakashi in close combat. Kakuzu uses his extra masks to attack them from afar with elemental blasts which Hidan, being immortal, survives and Team Asuma has difficulty avoiding.

Team Asuma realises that they cannot compete with Kakuzu's extra hearts and Hidan's immortality at the same time. Shikamaru volunteers to break Hidan away from Kakuzu to allow the others to fight Kakuzu alone. After Kakashi hands something to Shikamaru, Shikamaru tries to catch Hidan with his shadow. Having been caught by his shadow several times now, Hidan does his best to avoid it. In doing so, he does not notice Shikamaru getting close to him. Shikamaru punches him, joining their shadows and letting him trap Hidan.

Shikamaru forces Hidan to abandon his Triple-Bladed Scythe and leads him away. Kakuzu is impressed by their tactics, remarking that fighting Konoha ninja reminds him of when he fought the First Hokage. He merges two of his masks to double their damage and attacks. Meanwhile, Shikamaru brings Hidan to a remote location and covers the area in explosive tags. When his shadow reaches its limit, Hidan attacks him. He gets some blood, obtains a link, and stabs himself in the heart. Shikamaru collapses and Hidan starts heading back to Kakuzu. He is unaware that Shikamaru tricked him into creating a link with Kakuzu, thereby destroying one of his partner's hearts instead of Shikamaru's.

Shikamaru tries to sneak up on Hidan and cut off his head, but Hidan dodges in time. Shikamaru tells him how Kakashi had earlier managed to fill a capsule with some of Kakuzu's blood. When Hidan thought he had obtained some of Shikamaru's blood and formed a link with him, he had actually linked himself with Kakuzu. Shikamaru catches him with his shadow again. Meanwhile, Kakuzu has collapsed. Chōji tries to destroy his masks before they can reach Kakuzu but is unsuccessful. Kakuzu takes one of the masks' hearts and merges with the remaining two so that they will always be nearby. The two masks attack with a combined fire and wind technique, which the newly arrived Team 7 neutralises with a combined water and wind technique to protect Team 10.

Kakuzu regards Team 7's arrival as an opportunity to get more replacement hearts. Kakashi sends Sakura and Sai to backup Shikamaru while the rest of them fight Kakuzu. Naruto, wishing to demonstrate his new technique, insists that he fight Kakuzu by himself, which Kakashi agrees to. Meanwhile, Hidan approaches Shikamaru. Shikamaru uses the explosive tags he spread around the area to stop Hidan and tie him down. He then exposes a pit beneath Hidan that he prepared earlier. As he lights a cigarette a vision of Asuma appears to him. Now avenging his teacher, Shikamaru flicks the cigarette at Hidan, detonating the explosive tags.

Hidan's remains fall into the pit. He vows to escape and make Shikamaru pay, but Shikamaru doubts it. He causes the pit to cave in, burying Hidan. Meanwhile, Kakuzu realises that Naruto is the jinchūriki of the Nine-Tailed Demon Fox. Kakashi tells Naruto about Kakuzu's extra hearts but Naruto, unconcerned, charges at him. He uses some shadow clones to distract Kakuzu while he prepares his new Wind Release: Rasenshuriken, which Kakuzu realises could kill him. 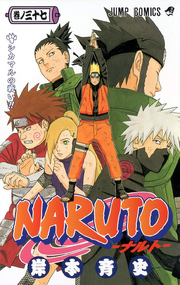