Shinko and her family moved to Konoha when she was nine. However, she retained her foreign accent, making her easily identifiable as not native to Konoha.

After graduating from the Academy and becoming a genin, Shinko, Itachi Uchiha, and Tenma Izumo were placed on Team 2 under Yūki Minazuki's leadership. To Shinko, it was obvious that Tenma was jealous of Itachi's skills and, moreover, that Tenma would never be able to surpass him. For this reason she pushed back against Tenma's frequent criticisms of Itachi and encouraged him to start valuing Itachi as a teammate. She placed some of this blame on Itachi as well, pointing out that his independent streak only incited Tenma into making poor decisions.

Team 2's performance during its first year - thanks in large part to Itachi - earned them the ceremonial honour of being the Fire Daimyō's guard during his annual trip to Konoha. During the trip, a masked man attacked the caravan and Tenma was killed. Exposed to the realisation of the horrors of the shinobi way of life, as well as the knowledge that she would never match up to the likes of Itachi, Shinko decided to quit and find safer work as a civilian. She started working at tea shop, which Itachi later unknowingly visited while having lunch with his friend, Izumi Uchiha. Shinko asked if they were on a date, which Itachi refused; Shinko guessed Izumi was not happy to hear that. Izumi eventually left the lunch in tears; Shinko guessed this was Itachi's fault.

After the Uchiha Clan Downfall, Shinko met with Himuka Suzukaze, who replaced her on Team 2. Shinko did her best to console Himuka, who was distraught by the news that Itachi killed his entire clan, Izumi included. Fighting back tears of her own, Shinko guessed there was something more behind Itachi's actions.

Shinko is a kind young girl who wanted to see her team happy, so she tried to foster better relations between Itachi and Tenma Izumo, who hated having a younger shinobi be better than him. She also is shown to be very considerate as Shinko scolded Itachi for belittling someone's dreams of becoming a shinobi despite their obvious weaknesses.

In the anime, Shinko also has a weakness for "cute things" as she loudly gushed at the sight of the young Itachi wearing cat ears and later when the ninneko defeated her (leaving her covered in paw prints and scratch marks) all she could say was that the cat's paws were "so soft" with a smile.[1]

While she was in the Academy, Shinko focused her studies on medical ninjutsu. For that reason, she served as Team 2's medic, treating wounds, providing information on poisons, and identifying enemies in disguise. 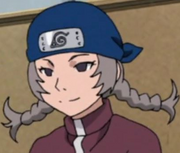