The Shinobi Union is the successor to the Allied Shinobi Forces.

Whereas the Allied Forces were composed only of the shinobi of the Five Great Shinobi Countries, as well as the samurai of the Land of Iron, the Union draws from any hidden village that wishes to participate. Principally led by the five Kage, the Union accepts missions from clients and forms a team from all its member nations' shinobi who are found to be most suitable for the mission. Such a system provides equal opportunity to all villages, eliminating the need for future conflicts.

Under the Union, the hidden villages and their associated countries quickly recovered from the Fourth Shinobi World War. In the interest of preserving the peace, a representative from each member village is stationed in every other hidden village so that they can discuss common issues and pursue mutual interests. When the Land of Silence emerges as a potential threat to the Union, the Union's chief organiser, Shikamaru, is tasked with stopping another outbreak of war.

Regulations forbid the Union members from armed conflict with each other, hence when Danjō, the Land of Earth's daimyō, ordered Iwagakure to conquer the Land of Flowers, whom are allied with the Land of Lightning and therefore under Kumogakure's protection, the Fourth Tsuchikage sought an excuse to withdraw from the Union so she would not be implicated in warring against Kumo. Kirigakure would most likely join Iwa in the war, due to their trade for vital minerals. This conflict nearly brought about the dissolution of the Union and its hard-earned peace, as such wars between villages were far more common than the anomaly of the Ōtsutsuki clan's global threat that brought the world together. If war does arise and the Union dissolved, it would mean peace may never be achieved again. Danjō also saw the Union as a hindrance to the true nature of shinobi, whom he believed to be soldiers meant to fight to from birth to death, and that constant conflict is what maintains power balance to prevent future disasters. However, with the Seventh Hokage and the Land of Fire's daimyō, Ikkyū Madoka, offering a solution to Danjō during the Continental Summit, persuaded Iwa from participating in the invasion, thus saving the Union. 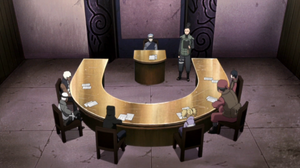