Shira (シラ, Shira) is a chūnin of Sunagakure and a teammate of Sen and Yome.

Shira was born in a small town near to the northern border of the Land of Wind, where his parents stayed while he moved to Sunagakure at a young age.[1] Because of his lack of ability for genjutsu and ninjutsu, Shira was forbidden from entering the Academy due to a rule established by the Fourth Kazekage. At the same time, he suffered the ridicule and scorn of his peers for his shortcomings. However, Shira worked very hard in the hope of becoming a shinobi with taijutsu alone, developing his skill through various unorthodox means.

Later, his taijutsu skills caught the eye of the new Fifth Kazekage Gaara. After testing Shira's skill, he reminded Gaara of another young shinobi who only had taijutsu at his disposal. Believing in Shira's potential despite his handicap, Gaara decided to abolish the rule preventing Shira from entering the Academy. Shira also began training the latter in taijutsu. Unfortunately, most people's mockery of Shira turned to jealously over Shira's recent luck, making it even harder for him to be acknowledged by others. After Shira graduated from the Academy and Gaara's taijutsu skills showed noticeable improvement, Shira decided to enter the upcoming Chūnin Exams to help further Gaara's reputation as Kazekage.

While Shira is looked down upon for his limited skill set, he is shown to be a very proud man. He never blames others for his shortcomings and only strongly believes that true determination will ultimately make one succeed. At the same time, he is very humble, showing a noticeable loyalty to his allies and leader Gaara. As seen in his battles, he is not reckless and carefully observes his opponents before acting. Shira's general demeanour shows him to be a calm, silent and level-headed individual.

Shira is a fairly tall young man with a rather fit physique. He has light skin, and spiky taupe grey hair combed backwards except for two bangs. He has several scars on both body and face (for which he may seem to look older), including one running vertically across his throat, and he also has what appears to be a tattoo of a blue-coloured dragon on his right shoulder. His attire consists of a long sleeveless, dark green shirt which he ties with a light green sash, grey pants, and black arm braces. His forehead protector is attached to the bottom of his shirt and he wears bandages on his right biceps. Shira also sports a small amber magatama necklace.

After his promotion to chūnin, Shira began wearing an identical outfit to Rock Lee's which the Konoha-nin gave as a gift. This consists of a green fully-body jumpsuit covering his arms, legs, and neck. Over it, he also wears orange leg-warmers.

While having no capacity for either genjutsu and ninjutsu, through sheer perseverance and ingenuity, Shira became a highly formidable combatant. He developed a very high level of skill, a feat all the more impressive given it was all self-taught before joining the Academy. During which, Shira's prowess proved great enough to hold his own against the Fifth Kazekage. During the Chūnin Exams, multiple enemy teams join forces against Shira rather than face him alone, further emphasizing how dangerous he is in battle.

Because of his lack of the other two main ninja skills, Shira instead honed his taijutsu prowess to masterful levels, which became the sole focus of his fighting style. He is very precise in his attacks and battle methods. During his demonstration to Gaara, Shira was able to easily manoeuvre through the Kazekage's sand attacks to get within striking distance, showing both excellent reflexes and evasion skills. Defensively, he was able to easily block one of Lee's kicks with one hand, and block all the strikes from Neji Hyūga's Eight Trigrams Sixty-Four Palms, shocking both opponents.

Shira possesses a great amount of physical strength, being able to send an opponent flying with a single kick and steady his body as an effective defence against other attacks. He also possesses blazing speed on par with Lee without his weights, unaided by techniques or chakra enhancement. As noted by Neji, because of his larger frame, he has very high stamina and endurance, being able to withstand enemy blows much easier than most.

Shira is proficient in a variety of fighting styles and battle tactics. This includes pressure point strikes similar to the Gentle Fist-style, regulating certain chakra moulding feats in the enemy. His signature style is the Silent Fist, which lets him strike with no sound by masking with chakra, making it almost impossible for his attack to be anticipated.[1] Shira's greatest technique is the Seven Heavens Breathing Method, which increases his lung capacity fourfold. This ability grants him increased physical prowess to the same degree as the Eight Gates. While this technique is active, Shira can fight equally against Lee with five of the Eight Gates activated.

After his training in the Academy, Shira became able to internally mould his chakra for feats such as walking on quick-sand without any problems and augmenting his attacks. His control likewise is very potent, being able to expel chakra from any of his tenketsu, allowing him to reduce if not completely neutralise the damage from an enemy attack.

Shira is very observant and analytical, elaborately deducing his enemies' strengths and weaknesses after seeing them fight only once. He has also shown his intelligence in other fields, such as being capable of creating powerful techniques of his own and is likewise very knowledgeable of other techniques and their specific mechanics. Shira is also a very effective teacher, training Gaara to rely less on his automatic sand defence and more on actual direct combat skill.[2]

Shortly after Gaara was made Fifth Kazekage, Shira's team went to join in the early Chūnin Exams co-sponsored by Sunagakure and Konohagakure. Entering the exams, his team was split into different rooms, with him being placed in room one. Shikamaru Nara, as a proctor, explained the goal of the written test on a monitor.[3] His team ultimately passed the first round since their combined score equalled 100 points as it was supposed to, and by leaving the bonus question unanswered. However, a preliminary round had to be held to lessen the many participants there were. The preliminary round involved a race to Suna where only the first 30 teams to arrive at the destination would qualify for the second phase.[4]

Ultimately, his team was among the first 30 teams to make it. The night of the arrival, when the genin got into a brawl during dinner, he was easily able to stop a direct attack from Rock Lee. Eventually, everyone lost their desire to fight due to Fū arriving with her optimistic ways. Afterwards, he was confronted by Lee, who deemed him as a worthy shinobi after their brief altercation. The next day, the second exam proctor, Temari, announced the start of the second round taken place within Demon Desert.[5] Once the second round began, Shira began a plan to ensure that all of the Suna-nin would advance to the next round. With his team, he was able to keep all strong enemy teams from approaching. Eventually, Shira and his team confronted Team Guy as they viewed them as the strongest rivalling team. With a careful genjutsu from Sen, Team Guy was launched into the Sand Waterfall Pit. Afterwards, Shira's team went to talk with the other Suna-nin on how to move against the remaining enemy teams. The other Suna-nin, however, betrayed Shira's team and attacked them, viewing them as weak and easy targets to advance through. As Shira began guarding his team with his body, Team Guy returned and quickly forced the other Suna-nin to retreat. While Yome began healing Shira, he asked Team Guy why they had saved them, to which the Konoha-nin explained that they felt compelled to save them from their treacherous allies. As Neji asked Shira why his fellow Suna-nin would do such a thing, it was explained that they had no respect for him as a ninja from which Lee deduced that Shira, like himself, was unable to use either ninjutsu or genjutsu and was ridiculed for it.[2]

Recognising Shira's greater struggles than his own, Lee angrily went after the other Suna-nin to make them atone. Lee's teammates soon caught up with the overzealous Lee and saved him from the Suna-nin's group assault. As Lee's team left them prime to defeat, when Shira's team arrived, Shira begged the Konoha-nin to leave them be. He insisted that their distaste of him is his fault for the person he is right now. determined to be a man of recognition in the future. After Lee and his team agreed, Shira offered his scroll to one of the Suna-nin teams as they technically defeated his team earlier. As Shira's words finally reached the spiteful Suna-nin, they declined and instead gave Shira's team and Lee's team their respective scrolls as they lost this battle. After the Suna-nin left, determined like Shira to prove themselves by finding more scrolls, Shira agreed to Lee's request to have a one-on-one battle.[6]

Quickly the two taijutsu specialists proved themselves equal in raw speed and skill, although Neji noted Shira had a slight advantage with his more solid built and by extension greater raw strength. As Lee attempted to use the Eight Gates on Shira, he found it impossible as Shira already anticipated this, having struck Lee's pressure points to prevent this. As Lee began changing tactics from Might Guy's teachings, manipulating how Shira would move, he began to drive Shira back. Ultimately, Shira thanked Lee, noting it was because of him that Shira himself became a ninja. Lee, however, insisted that it truly was Shira's own determination being recognised. Deciding he wants to face Lee at his best, Shira struck Lee's pressure points again to remove the block, letting Lee use the Eight Gates. Once Lee did, Shira unleashed his own Seven Heavens Breathing Method. As the two augmented fighters began clashing at such intensity, Shira's previous wounds opened, prompting Lee to call off the fight. As Shira was healed by Yome, he explained that after becoming a chūnin, he was going to enlist in a special force on the northern outskirts of the Land of Wind so he can watch over his parents. Lee wished Shira luck, acknowledging their new friendship.[1]

On the final day of the exam, seeing as his team had yet to find a matching set of scrolls, Shira's team decided to accept defeat and were glad to make it this far. They were then approached by Matsuri. Being a former student and fellow promoter of Gaara like Shira, she wished to battle him with no desire of obtaining their scroll. He gladly accepted and ultimately won the battle. Shira and his team then went to the main building to wait for the second exam's conclusion. Ultimately, the Chūnin Exams were ended early before starting the finals due to controversy happening in the second exam. Instead, it was decided by Gaara that a report on each participant would be sent to their respective village leader for them to decide if they would be promoted. Later, Shira, now a chūnin and wearing Lee's present, went through with his original plan and enlisted in the special force, saying good-bye to Sen as he left with Yome, who also signed up.[7]

Shira is a playable character in the following video games: 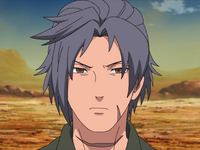