After the Third Hoshikage cancelled the star training because its risk was far too great, Shisō and his partner Yotaka led by Akahoshi, came to request the Third to resume the training. After the Hoshikage refused, he along with his partner assisted Akahoshi in assassinating the Third. Though questioning if it was going to far, they were silenced by Akahoshi. After this event, they claimed that the Third suddenly grew ill and died while Akahoshi became the self-proclaimed Fourth Hoshikage.

Along with Akahoshi and Yotaka, Shisō believed they must be willing to risk the well-being of the villagers to ensure their village would stand atop of the Five Great Shinobi Countries. For that reason, they were willing to assassinate the Third Hoshikage to resume the star training. Unlike the extremist Akahoshi, however, Shisō had his reserves, wondering whether they went too far in killing their village leader, and tried to persuade Akahoshi from going against the protesting villagers. When Akahoshi revealed that the three of them killed the Third Hoshikage, Shisō attempted to deny his part in it, fearing retribution. He would deceive others. He was also prone to panicking.

Shisō has long chin length black hair and dark-coloured eyes. He wears a purple forehead protector on his forehead and a blue-purple flak jacket with an black long sleeve shirt underneath it. He also wears a black pair of shorts.

He is able to use the Mysterious Peacock Method and could support Akahoshi's techniques by offering him his chakra reserves. He also managed to kill the third Hoshikage alongside Yotaka, although this most likely happened because they caught him off guard. He could also quickly recognise that he is stalked by someone.

They both assisted Akahoshi the assassination of the Third Hoshikage. When the Leaf Ninja were summoned to Hoshigakure to protect the meteor, Rock Lee and Tenten were suspicious of them and did a stakeout until being discovered. After Akahoshi kidnapped Sumaru, he sent Shisō and Yotaka to fetch the Konoha ninja to help Akahoshi fight Natsuhi. 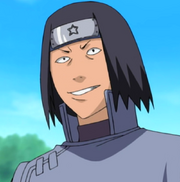