Shiseru (シセル, Shiseru) is an officer from the Hachō Village.

Shiseru grew up with Dokku, referring to him as brother. During their youth, she accidentally fell from a cliff roughly fifty metres high onto a tree. This incident left her with several severe scars along her torso and her being incapable to give birth. Dokku's inability to save her from the fall caused him to become a guard for the Tonika Village, but their relationship became distant over the years until they were practically strangers to one another.

She appears to be very formal, but also has a serious, and cautious side, seen when she threatens Yamato with her sword before she interrogates him. She seems to become quickly aggressive, seen when she slaps Miina almost in an instant after the latter didn't stop to bother Naruto. However, immediately afterwards, she felt strong regret about slapping Miina. She has also a soft and fond side, caring for the children Dokku rescued, as well for Dokku himself too. As a child, she was very wild and careless, resulting in her falling down a cliff and receiving several scars from it.

Shiseru is fairly tall and slender woman of feminine build. She is 32 years old.[1] She is light-skinned with wavy, midback-length, black hair, most of which is combed back with a few strands falling into her face. She keeps her hair open when in casual. She has blue eyes and full lips. She wears a dark blue uniform with gold trimmings, but is also seen wearing casual clothing when at home and when being younger. Her body is covered with large scars she received when she was a kid.

Shiseru appears to be a capable swordswoman, displaying the ability to catch Yamato under the chin with her blade before he could react. She also managed to skilfully fight several shinobi at once, being very nimble, fast, and strong enough to cut off a human limb with ease. She is also skilled in unarmed combat, able to counter a strike by blocking the arm with her hand and also disarm the reincarnated Tonika Village Head with a wrist throw. She has also a degree of familiarity and knowledge of medical treatment, taking care of Dokku's wounds.

She went with the village head and some other soldiers of her home-town to the destroyed Tonika Village to investigate the incident. After questioning Yamato about their purpose, she takes him and Sai to Disonasu. Shortly after, they heard a loud noise and head into the direction. Shiseru and the other soldiers were attacked by Kabuto Yakushi's reincarnated shinobi. She managed to defeat two opponents, just to see that they had regenerative powers. Shortly after, Kabuto withdrew his pawns and the group went to the Hachō Village. Shiseru leads Naruto Uzumaki and Sakura Haruno to her house to meet with Dokku and the children he rescued.

After some troubles because Dokku mistook the two Konoha-nin for enemies, the whole group ate together and bathed afterwards. Sakura noticed several scars on Shiseru's body, and the two then talked about Shiseru and Dokku's background. As Shiseru and Dokku were later watching the five kids sleeping after the bath, they began holding hands.

The next day, she participates in Naruto's training route and leaves for a short while alongside Dokku. When they return, Sora and Faz happily cling to her as they went home. Arrived, she tries to stop Miina from bothering Naruto, culminating in her slapping the young girl in the face. She heavily regrets her outburst later while talking to Dokku about the pros and cons of adopting the children. The two nearly kiss, but Dokku still regrets his failure in the past. When Disonasu appears with the Tonika Village Head, she is surprised as the rest after finding out the latter was brought back to life. She disarms him moments before he could kill Dokku and takes his sword to fight the other reincarnated shinobi, easily defeating them. She is shocked when Miina forces the clone snakes out of Naruto, who form a copy of his version 2 jinchūriki form. Shortly after reinforcements from Konhagakure arrived, the clone gains more power from Naruto and grows rapidly. Shiseru and her family are almost killed during the clone's rampage. Dokku entrusts Shiseru with Miina and the other kids while he tries to rescue Naruto. She wants to take Miina and bring her to safety, but the little girl hits her hand away, glaring at her hatefully, which deeply unsettles Shiseru. Moments before Dokku and Naruto are killed by the clone, Kabuto saves them with a giant snake. Shiseru witnesses this and tells the Konohanin about it. She later sits with Sakura in front of Hachō Village's town hall, blaming herself for her short temper. When Kakashi orders Sakura to get ready to move out, Shiseru begs him to follow them, which Kakashi allows.

As Neji Hyūga detects Kabuto Yakushi alongside the children who try to rescue Dokku on their own, Shiseru is shocked and hopes they will not be harmed. After she manages to get close to them, they try to flee but are stopped by lightning caused by the Ama no Hoko, forcing them to go back. Dokku claims to be able to use the Saezuri to stop the Ama no Hoko and wants to go alone, but Shiseru vows to accompany him. The two say farewell to the children and encourage them to go on without them in case they die. Dokku and Shiseru then rush towards the Ama no Hoko.

On their way, Dokku proposes to marry if both survive, to which Shiseru happily agrees. After they reached the Saezuri, Dokku starts to activate it but the two are disrupted by the fight between Naruto and his clone. After she was nearly hit by a giant laser beam, Shiseru is about to fall down a cliff and barely even manages to reach Dokku's hand. Their shared past happens again, and Shiseru yells at Dokku to let go of her in order to use the Saezuri to put an end to the whole story. After Dokku refuses, Shiseru thanks him for all he did for her and frees herself from his grip, readily commiting suicide. She was however saved by Naruto who tells Dokku to finally stop the Ama no Hoko, which the latter relieved did.

After the family happily reunites, they all thank Naruto for the things he did for them. 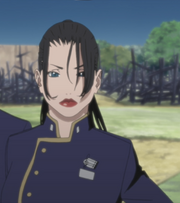