Shishio (シシオ, Shishio) is a genin from Sunagakure and a teammate of Ameno and Kōji.

Shishio has long dark violet hair that hangs over the front of his face in three parts, a short ponytail, brown-coloured slanted eyes, and hollow cheekbones. His outfit consists of a blue scarf, light green shirt and dark green pants. He also wears a dark blue Suna forehead protector.

As a sensor type ninja, Shishio is able to produce a sensing seal on the ground that acts as a radar, letting him observe a large radius around his location to locate individuals nearby. Shishio can also create sensing barriers, that disrupt an opponent's sensing skills. He is also proficient in sand manipulation, which allows him to create sand lions and even make himself and his allies invisible.

Shishio and his team arrive in Konohagakure to partake in the Chūnin Exams. For the first phase of the exams, they placed separately in another room from his other teammates. His team was able to qualify for the second round. A preliminary round had to be held to lessen the many participants there were. The preliminary round involved a race to Sunagakure with only the first 30 teams qualifying for the primary second round.[1] The next day, the second exam proctor — Temari, announced the start of the second round taken place within Demon Desert.[2] On the third day of the exam, Shishio used his sensing seal to find an enemy team, ultimately locating Team Asuma.[3]

Upon approaching Team Asuma, Ameno offered to let the team pass and use the oasis if they give up their scroll. The Konoha-nin quickly rejected the offer and Ino Yamanaka quickly launched an attack, to which Shishio quickly countered and knocked Ino out. Kōji then engaged Chōji Akimichi, but was quickly pressured by their taijutsu. Soon enough, Shishio finished moulding enough chakra to camouflage his team. Despite hiding themselves from the enemies' sight, Ino recovered and used her sensory skills to guide her team. Ultimately, Shishio and his team were defeated. While Ameno and the other medical kunoichi treated everyone, showing no ill-feelings towards each other, Ameno offered their scroll as they lost, but Sakura insisted that it was unneeded as they already had two scrolls. Then they all agreed to meet up again in the third exam.[4]

Ultimately, the Chūnin Exams were ended early before starting the finals due to controversy happening in the second exam. Furthermore, it was decided by Gaara that a report on each participant would be sent to their respective village leader for them to decide if they would be promoted.[5] 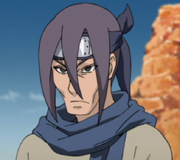