Shizuku (シズク, Shizuku) was a kunoichi who hailed from the Land of Demons and appeared in Naruto Shippūden the Movie.

She, like her teammates, was very overconfident in her abilities and can get easily carried away, abusing the extra chakra with overly powerful techniques simply to show off. She would often mock and trick her enemies. She has been described as an embodiment of irresponsibility. She apparently held the same goals as Yomi.[1]

Shizuku had fair skin, orange shoulder-length hair, and black eyes offset by blue lipstick. She wore a white attire with a hexagram symbol, similar to the rest of the Gang of Four, black gloves, a shuriken holster on her right leg, and martial artist shoes. When transformed her eyes became purple and her pupils became larger. She also gained three blue markings, one going from the top of her head and going down over her eyes and the last one going down over nose. Her hair became messy and a little bit longer. She gained two spike-like appendages jutting out the back of her elbow, one on each elbow.

Shizuku was shown to be a graceful fighter with manoeuvres of a rhythmic gymnast. She wielded kunai attached to chains which she had great proficiency in, easily slaughtering many of Shion's guards.

Her primary battle tactics while under the influence of Yomi's dark chakra revolved around water chakra. She could easily create large scale techniques that can overwhelm the entire area or attack from huge distances. She could also move at great speed with little effort by gliding on a stream of water. If faced with a life-threatening attack, she could turn herself into water. She also showed great control over fire during her first match up against Naruto, creating a ring of fire against him.

Shizuku was the lone female member of Yomi's gang, on a quest to release Mōryō. During the first encounter with Naruto and his team, she demonstrated impressive fire chakra skills that nearly killed Naruto. During the second battle, Shizuku performed the initial attack to separate Shion from her protectors by attacking them with an enormous Water Dragon. Neji was surprised to see that she has such tremendous mastery of water-chakra because he detected no such chakra in her during the previous fight.

After Naruto's team separated, Shizuku faced off against Naruto. Immediately, Naruto was forced on the defensive from her incredible water-based attacks. Whether he took to the sky or hid in the forest, he could not shake Shizuku. Eventually Naruto managed to outmanoeuvre her through his shadow clones and hit her with Rasengan, only to see her laugh it off by turning into water. She then revealed that her goal was simply to separate him from Neji before escaping. Later, after Neji deduced the secret behind the enemy's unusual power, Shizuku and her team get tricked into using up their enhanced chakra. While weakened, Sakura attacked by punching her in the face throwing her into a tree which fell and killed Setsuna. As the tree hits the ground, she was thrown off it and lands on her face, after which she struggled to get up but succumbs to her injuries and was left laying on the ground defeated. 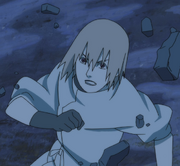