Using her Giant Folding Fan, Temari causes many currents of wind to collide with each other, creating vacuum pockets. On its own, the gust is powerful enough to blow away incoming attacks and knock targets off their feet. If a target should become engulfed in the winds, their body will be carved up by the countless wind blades.[1] Temari can control the form that the winds take, such as by making them into a tornado that lifts targets into the air.[2] She can also alter the intensity of the wind's cutting power, such as by having them cut open a samurai's armour without harming the samurai inside.[3]

In the anime, one can alternatively use this technique through hand seals rather than through use of a fan, changing the shape of the wind to that of a blade.[4] 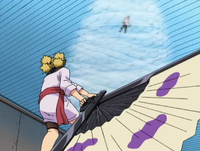