"Side Story 4: The Crybaby Ninja"

"Side Story Final Story: The Hero of the Sharingan"

Kakashi ignores his damaged left eye and joins Obito in confronting Kakkō, Rin's only remaining captor. They attack him and manage to release her. Kakkō, rather than let a group of kids continue to believe it would be that simple, causes a cave-in. Obito pushes Kakashi out of the way of falling debris. His right side is crushed and neither he nor his teammates are able to free him. Kakashi regrets allowing this to have happened, but Obito makes a proposition: since he never gave Kakashi a gift for becoming a jōnin, Kakashi can have his remaining Sharingan eye as a replacement for Kakashi's damaged one. Rin performs the transplant and Kakashi emerges from the rubble to face Kakkō. 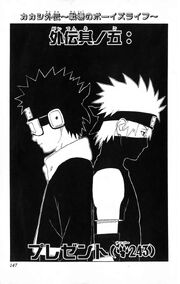