"The Time of Awakening!!"

"The Valley of the End"

Seeing his one-tailed form, Sasuke finally understands why others find Naruto so interesting. Naruto lunges at him and, although Sasuke's Sharingan is able to predict Naruto's movements, it cannot predict the chakra shroud's actions. Sasuke tries to attack from a distance but the shroud not only protects Naruto, it also extends his physical range. Discovering that he is no match, Sasuke advances his cursed seal to its second level to prove his abilities are superior. 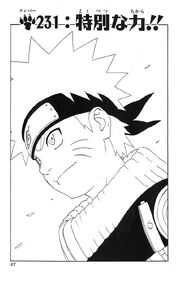