This is an enhanced version of the Akimichi clan's Human Bullet Tank. The user first wraps ropes around themselves that have kunai attached to them. Once this is done, they use the Multi-Size Technique and perform the Human Bullet Tank as normal. The kunai act as spikes, increasing the Bullet Tank's rotation power and, consequently, making it a much more destructive attack.[1]

Chōji's usage of this technique in Part II differs from how he performs it in Part I. Instead of covering himself in kunai, Chōji rapidly grows his hair out to wrap around his body, in a manner similar to Jiraiya's Needle Jizō. This results in far more spikes than the previous version, as well as a shorter preparation time due to Chōji not needing to wrap kunai around his body.[2] 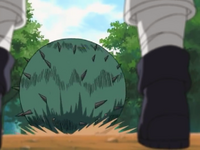