Han wears this steam armour (蒸気の鎧, jōki no yoroi) in order to use Kokuō's Boil Release to his advantage. Along with it covering his entire body, the armour contains a furnace in its back, where the steam is stored. The pressure resulting from this emitted steam can then be used to increase the force behind Han's physical attacks.[1] The exact amount of force produced is proportional to the quantity of steam released, as the greater the volume of steam utilised, the larger the pressure that can be built up within the armour is. For example, when a significant amount of steam was used by Han, just a simple kick was capable of knocking both Naruto Uzumaki and Killer B, who just caught the former, a large distance away.[2] 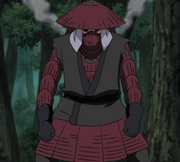