Sukui is a kind, serious and pragmatic individual. While not cruel, she demanded that Yūgao pursue Hayate, even though they were lovers in the past, believing that the recovering of the KIA scroll is more important for the outcome of the war.

Sukui is of short build and has a head of short, brown hair, and violet eyes. She wears a pair of red, ¾-frame glasses along with the standard attire of the Konoha-nin and the Alliance's forehead protector which is obscured by her bang.

As a medical-nin Sukui is exceptional at chakra control which she uses to perform medical ninjutsu. Sukui also incorporates the use of scalpels in her fighting style, launching them at her target.

Sukui was assigned to the Logistical Support and Medical Division during the Fourth Shinobi World War. During a lull in the war with the body count rising and the casualties coming in to be healed, the scroll which the division was using to seal away the corpses of the shinobi with kekkei genkai and other unique abilities was stolen by a reincarnated Hayate Gekkō and the two other ninja. Realising the gravity of the situation, Sukui formed a team consisting of Yokaze, Sakura Haruno, Iō, and Yūgao Uzuki to retrieve the KIA scroll. After realising that she was putting Yūgao in a terrible spot, Sukui apologised but noted that in order to have the mission turn out well, they needed her to participate in the retrieval.

With each of the battlefields wrapping up their fights, Sakura and Shizune leave to aid Naruto and B in their battle, leaving Sukui and the others to tend to the wounded. 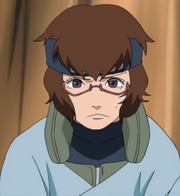