This is a special "ninja tool summon" that allows the user to seal ninja tools like swords or kunai into a scroll or their clothes beforehand, allowing them to be called upon when needed. The ninja tools can be summoned in an instant just by touching the sealing "marks" which can be drawn anywhere. The greatest advantage of this technique is that the time between taking out a ninja tool, taking the right stance and actually throwing it is greatly reduced. Also when a weapon such as a fūma shuriken is summoned, the time needed to throw it can be further shortened by having prepared the weapon in its fully extended form beforehand.

The ninja tools are thrown with the actual speed of a flash of lightning, ruining the opponent's outset of the battle, and snatching away the initiative. Furthermore, because the summoned ninja tools can remain hidden until right before they are used, if this technique is mastered, there are an exceptional number of possible tactics. A large number of ninja tools can be stored within the sealing marks, which can make the efficiency of this technique last longer. 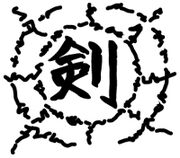