The Super Beast Imitating Drawing is a technique that allows the user to animate ink drawings, which act upon the user's will.

Using chakra-infused ink, the user can quickly and expertly draw objects onto their scroll. The moment the brush is removed from the scroll, the images leap from the paper, grow to life-size, and act according to the user's will. Because they are made of ink, a single blow is usually enough to dispel them. For discreet communiques while undercover, Sai is able to turn the words he writes into small animals, allowing them to travel unnoticed to the intended target, after which the ink animal requires a scroll to revert back into written information.[2] In addition to the animals it is normally used to create, Sai can produce explosive tags.[3] In the anime, for the drawings to retain stability upon emerging, the user's emotional state must have a true passion for them. Otherwise, the drawings will immediately splatter.[4] 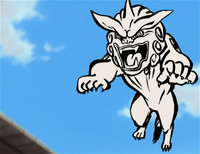 Tomoe Lion (巴獅子, Tomoe Shishi)[5] - for attacking from a distance. They are usually created in small groups as Wild Lions (乱獅子, Ranjishi)[6] to attack foes directly.

Hawk (鷹, Taka)[7] - can be ridden for reconnaissance or high-speed travel. Smaller variants can be used to carry explosive tags or be used to deliver messages.

Rat (鼠, Nezumi)[7] - can swarm across an area to search for a target much faster than the user would be able to on their own. Being so small, the rats are inconspicuous, also making them suitable for covert message delivery.

Snake (蛇, Hebi)[6] - can be used as ropes to restrain someone. With the ability to soundlessly enter through even the smallest crevice, they can also be used for assassination purposes.

Tiger - as with lions, this tiger be used to swarm a target and attack. Also used for sealing his enemy. 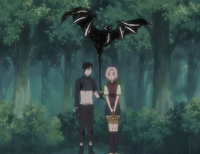 Bat,[7] seen in the anime - can morph into a makeshift umbrella, or attach themselves to the enemy's face and blind them.

Fish, seen in the anime - Useful in delivering messages in water.

Leech, seen in the anime - Larger and heavier leeches can also be drawn.

Crab imitation of the Gatekeeper, seen in The Last: Naruto the Movie.

Cat, rabbit, and squirrel, seen in the anime.

Hawk, used for transportation and picking up objects.

This technique is in reference to the Chōjū-jinbutsu-giga (lit. Animal-person Charicatures), or Chōjū-giga for short, a set of four picture scrolls belonging to the Kōzan-ji Temple in Kyōto, Japan and sometimes credited as the first manga. The scrolls depict various anthropomorphic animals dancing and playing about in a lively ceremony, which seems to be the basis for Sai being able to animate his own drawings for various purposes.

Inojin Yamanaka's usage of the technique differs from his father's in terms of the aesthetic design. Unlike Sai's round drawings, Inojin's have sharp, straight lines. Inojin remarked that his father's sense of style appears to be "old-fashioned" compared to his own.[8] Appropriately, his design is named Super Beast Imitating Drawing: Modern Era (超獣偽画・現代, Chōjū Giga: Gendai).[9] 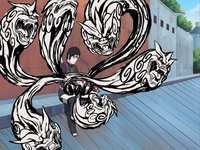