Susanoo is a gigantic, humanoid being made of the user's chakra that surrounds them and fights on their behalf. It is the strongest ability available to those who have awakened the Mangekyō Sharingan in both eyes.[2]

When activated, Susanoo forms around the user and becomes an extension of their will, acting and attacking on their behalf. By default, Susanoo is anchored to its user and they to it: in its less developed forms it will move around with the user; in its more completed forms the user will be suspended within Susanoo, being brought with it as it moves around.[3] This connection allows Susanoo to shield against physical attacks, one that becomes more difficult to penetrate as it is manifested more fully. If it is damaged, Susanoo does not regenerate and it can only be repaired either by advancing it to the next developmental stage or by dispersing it and then forming it anew.

Although Susanoo is quite effective as a defence, it is able to distinguish in what it blocks. For example, the user can still perform jutsu while within Susanoo and the attacks will pass through it without complications.[4] Others can be brought within Susanoo with the user's permission,[5] and users can likewise choose to leave Susanoo's protective envelope.[6] The latter property can be used against the user, as if an opponent can bypass Susanoo, however slightly and latch onto them, they can be pulled out of Susanoo.[7] With continued mastery, Susanoo can have increased defensive capabilities even at its ribcage stage, as seen when A was able to crack a rib of Sasuke's Susanoo, but could not even crack Madara's. Susanoo is also only able to defend against physical attacks, so they are still vulnerable to visual[8] or auditory attacks.[9]

So long as it is active, Susanoo draws on the user's chakra in large amounts. Sasuke Uchiha describes the sensation of using Susanoo as feeling pain in every cell in his body, which only increases over time and at higher developmental stages.[10] Being a Mangekyō Sharingan-based ability, it also places a strain on the user's eyes the more it is used. However, it is not actually necessary for one's Mangekyō Sharingan to be active while using Susanoo;[11] in fact, Madara Uchiha is able to use it without any eyes at all.[12]

As seen with Sasuke's learning how to use it, Susanoo has several developmental stages. Practised users go through all the stages every time they manifest it, layering more advanced stages over earlier ones or stripping them away as is needed; they can choose to stop at any developmental stage along the way if they choose to. At its simplest level, users only manifest aspects of Susanoo's skeletal structure, such as a ribcage for basic defence[13] or an arm for interacting with the surroundings.[14] Once a full skeleton is made, musculature and, later, skin forms until finally a complete humanoid is shaped. In these early stages, typically only the upper half of Susanoo is materialised, with legs becoming common once it reaches its full humanoid form; however, not all Susanoo users can accomplish the latter feat.

In its next stage, armour forms around the humanoid for further protection, causing it to resemble a yamabushi. In its final stage, users stabilise the chakra that comprises Susanoo to create a colossal form known as the Complete Body — Susanoo (完成体 須佐能乎, Kanseitai — Susanoo, Viz: Perfect Susanoo, Literally meaning: Complete Body — He with the ability to help by all means), the ultimate ability of the Mangekyō Sharingan.[15] In this state, Susanoo gains a tengu-like nose, wings for flight, and is clad with robes and ornate armour. This form possesses power comparable to that of a tailed beast, capable of levelling giant mountains and, when enhanced by Six Paths Chakra, small planetoids with ease. Users can also channel their own techniques into the Complete Body — Susanoo,[16] as well as shape it around the Nine-Tails to improve its offensive and defensive capabilities.

Users are able to mingle the chakra that makes Susanoo with chakra from other sources. Sasuke uses the chakra from Jūgo's Sage Transformation to make a "Senjutsu Susanoo" (仙術須佐能乎, Literally meaning: Sage Technique He with the ability to help by all means), with markings reminiscent of the Cursed Seal of Heaven spreading across it.[17] He later stores the chakra of the nine tailed beasts within his Susanoo, drastically improving its strength and causing lightning to emanate from its back.[18]

Susanoo differs between users, in terms of colour, design, and weaponry. Some features are consistent, however, all Susanoo constructs are deviations of the Japanese tengu, they also have two sets of arms — one of which can form wings as part of its Complete Body form — and six fingers on each of its hands. All Susanoo wield at least one sword.

Itachi Uchiha's Susanoo is yellow in the manga;[19] in the anime, its skeletal and armoured forms are red and its humanoid form is orange.[20] In its humanoid form, its face is framed by locks of hair, with an appendage on its chin reminiscent of a Pharaoh's false beard. When its armour is formed, Itachi's Susanoo resembles a long-nosed tengu and it wears a pair of magatama earrings.

Itachi's Susanoo possesses a curved blade that resembles a dagger or tantō.[21] He rarely uses this, preferring his Sword of Totsuka, wielded in its primary right hand and sheathed in a sake jar held by its second right hand. The Sword of Totsuka is an ethereal weapon with an enchanted blade that, in addition to standard cutting, can seal anyone it pierces, trapping them in a genjutsu-like "world of drunken dreams" for all eternity. In its primary left hand, Itachi's Susanoo wields the Yata Mirror, a shield that can change its nature depending on the attack it receives, thus nullifying it. According to Black Zetsu, the simultaneous use of the Sword of Totsuka and the Yata Mirror made Itachi essentially invincible.[1] For long-range attacks, Itachi can use Susanoo to perform Yasaka Magatama.[22] In Naruto Shippūden: Ultimate Ninja Storm 4, Itachi has an exclusive Complete Body — Susanoo form that retains the traits of his previous forms, including a retractable version of the Yata Mirror, and a broadsword version of the Sword of Totsuka. 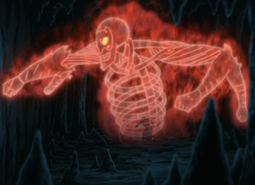 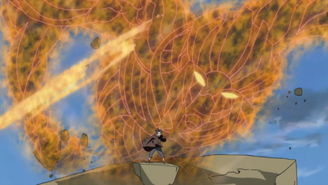 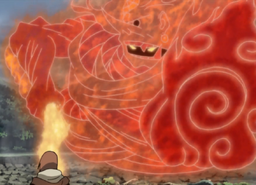 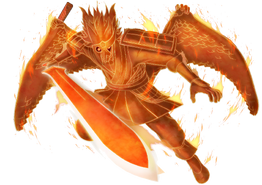 Sasuke Uchiha's Susanoo was initially depicted as a dark shade of blue in the manga,[23] though it is purple in all other medias. Because Sasuke's development has often been marked by intense feelings of hatred, his Susanoo is noted to be much darker in composition compared to Itachi's.[24] Whereas Itachi's Susanoo appears relatively "normal", Sasuke's possesses demonic horns, a long appendage on its chin, and a malevolent grin. Its armoured form initially appears largely the same as Itachi's save for having jagged teeth around its hood.[25] After Sasuke gains the Eternal Mangekyō Sharingan, however, its appearance changes, the armour's mouth taking on a beak-like shape and generally becoming ghastly-looking.[26]

In its Complete Body form, Sasuke's Susanoo has a helmet that features a long tengu nose, two spikes over each eye, a slit stretching across its mouth, three gaps on each of its cheeks and one additional gap on its chin. Because of his Rinnegan, Sasuke can use the wings of his Complete Body Susanoo to block out the light of the Infinite Tsukuyomi.[27] When drawing on the power of the tailed beasts, the armour of the Complete Body form is reduced somewhat, exposing the humanoid within. Sasuke is able to perform his Chidori through this enhanced Complete Body Susanoo,[28] as well as Fire Release: Great Fireball Technique in the anime.[29] This form is capable of generating a sword instead of having it form alongside the Complete Body Susanoo, enabling the user to catch opponents off guard.[30]

Sasuke's Susanoo has a blade in all its forms: a sabre in its developmental forms;[31] an Ōdachi in its humanoid form, wielded with its second right hand;[32] a pair of katana in its Complete Body form.[33] Its primary weapon, though, is a bow, manifested on the wrist of its left arm; the bow can double as a shield, a function that becomes more visually apparent in its armoured form.[25] Arrows are drawn from an orb held by its primary right hand and can be fired very quickly, such that only Kabuto Yakushi, while utilising Sage Mode, has been able to avoid one.[34] The arrow's properties can be augmented, either with black flames in its armoured form[35] or lightning in its Complete Body state.[36] 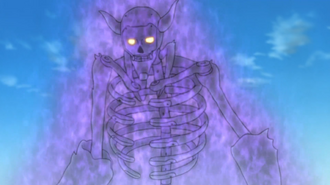 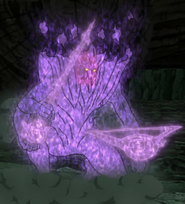 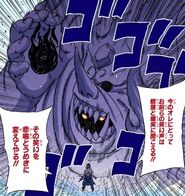 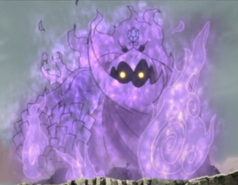 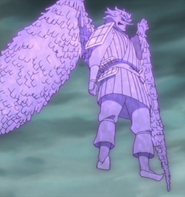 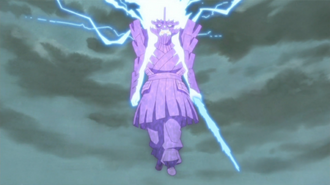 Madara Uchiha's Susanoo is blue in colour.[37] His Susanoo is made up of two entirely different sides that are conjoined along their spine, both of which have a distinct face: the front face has elongated canine teeth in its lower jaw bracket and two tusks growing from said jaw, while the back face has similarly elongated canine teeth in its upper jaw bracket and a single horn protruding from its forehead. In its armoured form, the usual tengu-like armour splits from its forehead down, revealing Susanoo's eyes while obscuring the rest of its face. Curiously, his armoured Susanoo appears to always form the Tiger hand seal with its front hands, and is the largest of its variation.[38][39] In its Complete Body form, its head gains a long tengu nose and two lines running down from its mouth to its chin area, as well as hair which is tied up at the sides.

Madara's Susanoo wields distinct, undulating blades that resemble kris, held in the right hand of each side. He is able to throw the blades as guided projectiles.[40] In the anime, Madara was able to manifest swords in all four of Susanoo's arms; the blades left traces of blue, fire-like chakra in the ground after impacting and could unleash shockwaves capable of obliterating numerous shinobi in a single strike.[41] In its Complete Body form, the swords more closely resemble traditional katana, complete with sheaths held in the secondary arms. These swords can cut through mountains across great distances.[42] For long-range attacks, Madara can use Susanoo to perform Yasaka Magatama.[43] 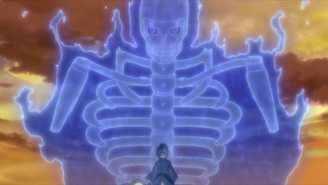 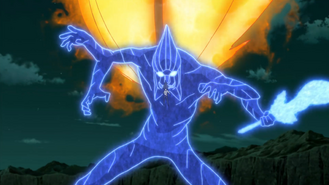 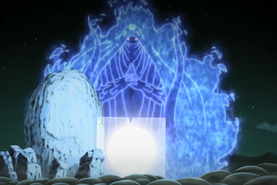 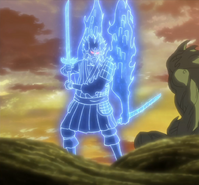 Indra Ōtsutsuki's Susanoo is purple in colour. In its Complete Body form, it has accentuated eye-holes, a long tengu nose, a spike over each eye, a slit across its mouth and three gaps on each of its cheeks.[44] In the anime, the skeletal form of Indra's Susanoo was also shown.[45] 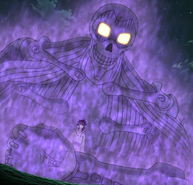 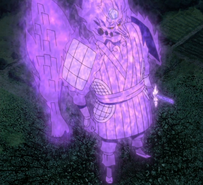 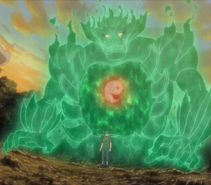 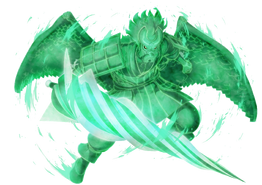 Kakashi Hatake's Susanoo is light blue in colour. The Susanoo he uses has only been seen in a Complete Body form. It had the characteristic tengu nose, a forehead protector-like plating on its head, two locks of hair falling on either side of its face, a hole in its chin, and a vertical mark extending across its left eye, similar to Kakashi's own signature scar. It wields a katana,[46] but its most notable weaponry are the Mangekyō-shaped shuriken that can warp away targets on contact.[47] 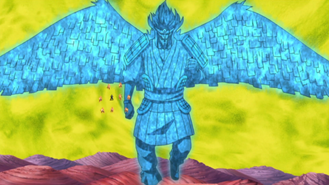 In the anime, Hagoromo Ōtsutsuki showed a light blue Susanoo capable of entering its Complete Body form and utilise chakra blades. Two locks of hair fall on each side of the face and a single horn protrudes from the chin, resembling Hagoromo's facial hair. It possesses a sharp tengu-like nose and a jagged mouth, giving it a demonic appearance. His Susanoo was much larger, reaching a size comparable to the Ten-Tails.[48] 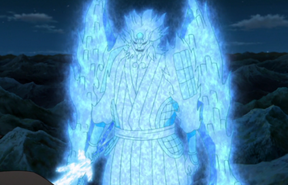 Retrieved from "https://naruto.fandom.com/wiki/Susanoo?oldid=1185267"
Community content is available under CC-BY-SA unless otherwise noted.