The Kusanagi Sword is the Kusanagi of Japanese legend. Orochimaru retrieves his Kusanagi by opening his mouth and extending a snake which then opens its mouth and produces the sword. Orochimaru was seen producing the sword handle first so he could use it freely, or blade first to attack his opponent instantly.

The sword can quickly extend and retract its blade to attack from long distances, be controlled telekinetically according to Orochimaru's command, and cut through almost anything. Even Enma, who is able to transform into a diamond-hard staff, noted that the Kusanagi blade would leave him considerably sore.[1] It should be noted that Orochimaru's Kusanagi could not pierce Naruto Uzumaki's four-tailed form.[2] The sword has been seen transforming into a small snake and returning to Orochimaru.[3]

After Orochimaru re-emerged from Sasuke Uchiha through his Eight Branches Technique, he was sealed by Itachi Uchiha's Sword of Totsuka. As a result, the Kusanagi was subsequently sealed with him. As he was brought back via the Evil Releasing Method, the fate of the sword is unknown. 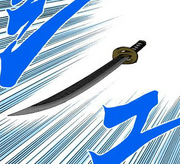 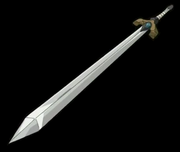