Tajima Uchiha (うちはタジマ, Uchiha Tajima) was a member of the famed Uchiha clan during the war-torn era, preceding the era of hidden villages.

Initially a father of five sons, Tajima lost three of them in battle against the Senju, and was left with Izuna and Madara at the time of his introduction.[2] He made an appearance on the battlefield alongside his son Izuna after finding out that his other son Madara was meeting with Hashirama Senju on a regular basis. Thinking along the same basis as his nemesis Butsuma Senju, he and Izuna attempted to take advantage of Madara's meeting with Hashirama to eliminate another Senju. When he was greeted by Butsuma and Tobirama Senju, the Uchiha noted that they thought along the same lines as he prepared to draw his tantō.[3]

Tajima tried to attack Tobirama, intending to use his death to shake Butsuma's resolve, so that he could gain an advantage over him, but his attack was foiled by Hashirama. After Madara admits to being weaker than Hashirama when Tajima asked his son whether or not he was ready to join the fray, the Uchiha reluctantly retreated, and though he was not able to gather any intel on the Senju in this endeavour, Tajima was pleased nonetheless that this situation had allowed Madara to awaken his Sharingan.[4]

Tajima was a calm and stoic individual. He also seemed to have great confidence in his son, Madara, respecting his decision to retreat from a confrontation with the Senju after Madara noted that the odds were probably against them with Hashirama present.[5] Like Butsuma, he sought to gain information from their enemies using his son's relationship with Hashirama, and though this ultimately failed, he was none-the-less gratified that Madara's Sharingan awakened as a result.[6] He and Butsuma were also very alike as a result of their continuous battles, both in skill, and mindset, which was why they presumably ended in stalemate with every confrontation. They even shared no hesitation in killing each other's respective offspring just to create an opening to attack the other.[7]

Tajima had dark-coloured eyes, as well as dark-coloured hair that was shaved in the back, all framing a gaunt-looking face which was further accentuated by his mouth which naturally curled downwards. Attire-wise, he wore a standard black attire, with a high collar, a breastplate with additional plating over the outer legs, foot wraps, sandals and a tantō strapped horizontally to his back.

As the wielder of the Sharingan,[7] Tajima was blessed with the various advantageous abilities of the eyes which greatly enhanced his own combat prowess on the battlefield, enough that he was noted to be evenly matched with his rival Butsuma Senju. He also carried a tantō strapped to his lower back, indicating that he was a practitioner of kenjutsu.[8] The fact he was able to survive up until adulthood during an era when many young children died in wars suggested he was a very gifted shinobi. 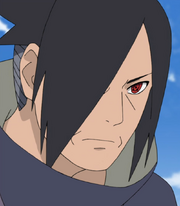