Is there any source of where this name came from? I mean, a trailer or something? If so, it can't be too reliable yet, as the script tends to change. Yatanogarasu 06:03, August 19, 2010 (UTC)

Where did the names of the jutsu come from?

From the movie, there's a subbed version somewhere out there. The names are accurate according to the sub. And for some reason, movie characters don't show techniques from a higher canon status than their own. If you check the jutsu list link in the infobox, you'll see that he is listed as having those. Omnibender - Talk - Contributions 20:30, April 30, 2011 (UTC)

Let's see…
The text in the first image is Chinese and says 'incantation' (咒语, Zhòuyǔ).
The text in the second image is gibberish to me: Oh Mayuragiranti, Sowaka.
The text in the third image is threefold:
A bit of research tells me that the Japanese should really be おん まゆら きらんでぃ そわか (On Mayura Kirandi Sowaka), which is the Japanese version of the mantra said in Mahāmāyūrī's honour. The original is pronounced as Oṃ Mayūrā Krānte Svāhā. —ShounenSuki (talk | contribs | translations) 00:49, July 5, 2011 (UTC)

Thanks very much. :) So, can we say that he use a jutsu(incantation - in the anime, jutsu is more appropriate) called Peacock Wisdom Queen that can allow him to absorb the seal and make it part of himself. Because the seal is manipulation of time and space, Mukade is send back in time and when Naruto is caught in the blast is send also back in time but he appeared six years after Mukade because of the moment when he was suck into the blast(few seconds after Mukade was caught into the blast). Mukade absorbed the seal and make it part of himself - that means he appear to be like a container of the seal and that is why he must be killed(the seal will no longer be active so the people caught in this seal will be freeeeeee :)) to allow Naruto to go in his own time. I thing that we definitely should add this justu because this is the main reason for the movie to have a plot :). I will make the article soon - just the name sounds strange for such a technique, but all techniques are with weird names :). Thanks a lot, again, ShounenSuki.--Donatello (talk) 12:17, July 10, 2011 (UTC)

That would be Manipulating Attack Blades, and we're not adding Fire Release because he was using Ryūmyaku chakra, we don't know if he had to change his chakra using fire nature transformation. Omnibender - Talk - Contributions 21:15, April 5, 2012 (UTC)

Should not we add in the trivia the resemblance of mukade's ultimate form with the shakokidogu,that were small statues constructed of clay in japan during the jomon period ?

and images to compare: mukade: 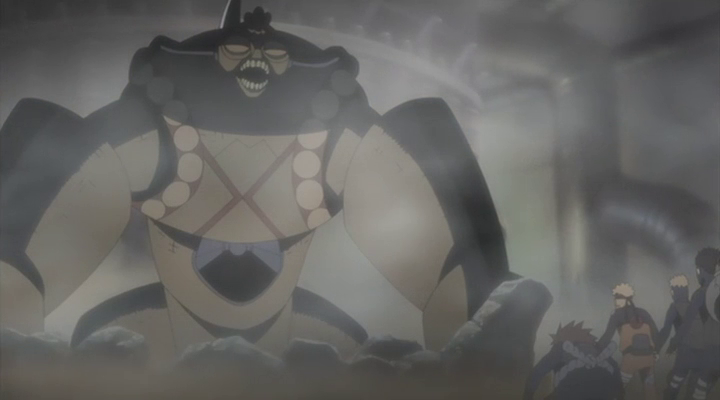 Retrieved from "https://naruto.fandom.com/wiki/Talk:Mukade_(movie)?oldid=876194"
Community content is available under CC-BY-SA unless otherwise noted.