Tamaki (タマキ, Tamaki) is a young girl who works at a shop in an abandoned city along with her grandmother, Nekobaa. They live with a lot of cats, including talking ninneko such as Denka and Hina. She would later move to Konohagakure to settle with several cats.

In the anime, it was shown that Team 7 was assigned to collect the last paw print for the Paw Encyclopaedia which she brought to her grandmother. Also, she and her grandmother helped Team 7 by lending them cat ears to sneak into the Cat Fortress of Nekomata.[2]

In the anime, Tamaki was shown to have had a crush on Sasuke Uchiha when she was a child, though Naruto Uzumaki mistakenly believed she had a crush on him. She seems to be a caring person, even towards strangers like Jūgo.

Despite Kiba's convenient bluffs at the beginning, Tamaki fell in love with him. Despite not marrying, they are happy together despite occasional cat and dog related arguments.

Tamaki has long brown hair reaching below her waist as well as hazel eyes. She wears a sleeveless red blouse, light-coloured pants, fishnet stockings as well as sandals. She also had bandages wrapped around her upper left hand. It was shown that as a child, her hair was shoulder-length and she wore an orange sleeveless blouse with a dark red shorts, fishnet stockings, and sandals.

Main article: Itachi Pursuit Mission When Sasuke and his team went to the shop in order to stock up on items for their battle against Itachi Uchiha, Tamaki attempts to find clothes for Jūgo. She reprimands her grandmother for telling her to wrap him in a curtain.

Tamaki runs into Kiba, Akamaru, and Shino Aburame as they are searching for the Beekeeper, leading her to diffuse a situation they were having with ninneko, Momo. As Kiba is left in a love-struck stupor with her appearance, Tamaki happily leads them to the Beekeeper's location while Kiba begins to successfully gain her affection (through blatant lies and convenient truths). When they arrive in their location, Tamaki warns the trio that no one ever leaves the fogged bamboo forest. Once they enter, Kiba boasts his superior abilities to ease her worries.

Main article: The Beast that was Shot by Love!! Upon first meeting Kiba Inuzuka in Konoha, Tamaki and Kiba have gained interest in each other, with Akamaru interfering.

Main articles: Konoha Shinden (novel) and Konoha Shinden (anime) NOTE: In the anime, the events of this arc occur after the Versus Momoshiki Arc. Kiba and Tamaki alongside their pets attend the Cat-Dog Festival, to visit the hot springs. While arguing over which hot spring to visit first, the pair bump into Mirai Sarutobi, Might Guy and Kakashi Hatake. The couple was quickly recognised by the townspeople for their respective reputations as animal breeders. Kiba quickly enjoyed all the praises he was getting from the dog lovers, which began to cause a rift between Kiba and Tamaki, as both began getting as competitive as the town over which animal was better. Wanting to help the couple, but seeing Kiba was too caught up in all his fans, Mirai gave Tamaki an apology letter disguised as written by Kiba. The effort backfired from her lack of understanding in cats, which Kiba would have, causing Tamaki to join the cat-loving villagers in a fight against the dog-lovers. Mirai then used a genjutsu in the form of a Cat-Dog spirit to calm the townspeople, making them think it was a sign to stop fighting. With the feud over, Kiba and Tamaki made up, decided to go to one of the hot springs as they originally wanted.

Main article: Boruto: Naruto the Movie On the day the Five Kage spectate the Chūnin Exams in Konoha, Tamaki watches the fights beside Kiba and Akamaru. 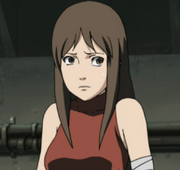